Difficult to imagine, for people born in the Digital Era, but I’m one of those old goats who still remember that the mere word Internet was not on any vocabulary, encyclopedia or anything, even after we had gone through our late teens.

Before that historic day, just a few computers put together in a network were able to communicate with each other using a “packet switching” protocol.

The problem was that the computers within one specific network used a specific “language” to communicate with each other.

This had the bad consequence that all the different systems (networks) in turn, were unable to communicate with each other and therefore remained isolated.

It was thanks to pioneers like Vint Cerf, Robert Kahn and Jon Postel, that a “common” language was created and applied to all those different networks (the most famous being the ARPANET one).

Together, they formed the TCP/IP, which anyone today will recognize as the “motor” of all Internet communications.

The TCP/IP was tested across the three existing types of networks and eventually was promoted to be their new communication standard.

In 1981, a big plan was set up to migrate all the 400 (!) hosts of the ARPANET from their older protocol to TCP/IP, with a deadline of January 1, 1983, after which all hosts not switched over would be cut off completely.

The project deadline was met and as a matter of fact, from that day…:

THE INTERNET WAS BORN!

A nice commemorative article can be found on one of the founder’s blog.

So let’s raise our glasses to the Father Founders of the Internet!! 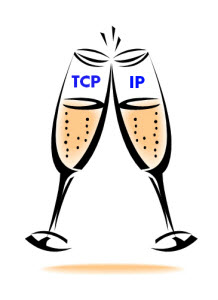