oday I was going to write about Easter and how much I do not celebrate it, but then I sat at my wife’s new laptop (which was the result of the struggle described here) and the inglorious bastard (running Windows 8.1, hence the affectionate description) started to moan about updates.

OK, ok. Updates are something you cannot do without (if you are using Windows), so in this vastly imperfect world of Microsoft, you have to spend most of your time either fixing a problem or downloading something that will fix another one that you haven’t had yet encountered (but wait… this new update will actually mess up something else so that you eventually will have a new problem at some point or another). 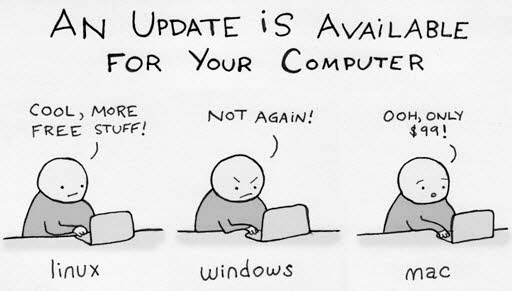 Anyway, as half-hearten Windows user (Windows is for me the only way to play some games I like, while all the rest is done on a Linux machine, except at my workplace, where I’m chained to the Microsoft slavery bank), I was already cursing the message that there were updates waiting and on top of that I had the familiar feeling that Microsoft might actually have managed to cock-up also this function in W8.1.
I had to look very carefully for any screw-ups.
…This could get really interesting.

In less than 12 seconds, I was confronted with a classic Microsoft screw-up.
Let me explain…

At log-in there’s a message that tells you that there are updates waiting for you.
This message also states that you can install those by “simply” going to the “Settings” screen.
End of message.

So far, very informative (kudos for that) and gives you the option to switch the bloody box immediately OFF and go doing something useful for a change.

But say that you actually have the intention of losing some valuable time with the updates.

…Oh by the way: does anyone know of any Windows update that does NOT require a reboot?

I run my Linux updates while working on some irreplaceable stuff and I never loose any bit (or byte) of it because I never need to reboot the PC. How refreshing is that, hey?

But OK, we want to do the updates.
Fine, so first of all: there is no Settings “screen”, because the Settings icon is hidden somewhere in the god-forsaken “Charms Bar” (come on Microsoft, you are starting to look like the maker of “My little pony in La-la-land OS”).

Anyway, once you realize that you are not looking for a screen, but for a stupid bar that slides out of the right-side of your screen only if you can point the mouse cursor precisely at the right spot of the upper-right screen corner (a tablet with touch-screen is NOT a Computer, no matter what MS says in order to make us buy one…) and move it accordingly before the “charms” fold back into oblivion (where I could send them for good if that depended on me…), only to realize that your martyrdom is only just started (hey, looks like I managed to put some Easter spirit in this post after all).

Once you click on the “settings” icon (still not a screen…) it opens a panel where you have several non-descriptive definitions (aka links starting some non-better identified “App”).
Eventually, by the power of the deductive mind, you opt for one that says “Change PC Settings” located at the very bottom of the panel, as if it doesn’t really belong there.

Now in my world, which may seem too linear and too logic to most Microsoft Developers, the definition of “Get Updates” does not really makes me think of “Change (the) PC Settings”, right?
Which user is willingly going to mess around with the “PC Settings” when the only thing you need is a damn Update?

So, eventually you give in to your worst suicidal inclinations and click on the wretched “Change PC Settings” link and hope that there is a “Cancel” button if you get there and have no idea what to do next…

In due time you land into a screen (finally…, a real screen) where you see another choice: “Update & Recovery”, which may be (or may be not) the place you are desperately trying to get to.
And indeed, once you go there, there’s the beautiful old-fashioned “Windows Update” screen that you have been looking for so long.

Grateful for that and after only 10 minutes of frantic searches, uncertainties and guessing, you eventually start what in Windows 7 took you no more than 2 clicks (with a mouse: no “swipes” and other crap like that) and less than 4 seconds.

Fortunately, there were only 7 updates waiting, three of which were absolutely useless (all the Bing crap can go straight into the toilet and get a good flushing, together with the update for a “Microsoft Office” version that is not even installed on the machine!), so your hopes are starting to grow that in the end the whole thing won’t be that bad.
Just a few packages to bring down and a driver or two (NIC and GPU)… You will be done in a few minutes.

And here it comes… BIG surprise: those four stupid updates are good for almost ONE GIGABYTE of downloads!!!

Hey Microsoft, are you out of your friggin’ mind?

You don’t believe me? Here’s the screenshot:

So first of all the size: 4 updates for a whopping 998.7 MB.
Doing that over WiFi it’s not a joke and it seems to take so many resources that the Laptop (which runs a respectable Intel i5 CPU with 8 GB RAM, for chrissake!) becomes as swift as a hippo hugging a mud-bank.

And then, below the absurdity of the download size, you also read: “Updates were installed: Yesterday at 6:32 PM (Failed)”.
How so “Failed”? The wretched machine did not even tell me that it was installing something, let alone that it had “failed” doing that!!!

So now Microsoft is not only pushing a crap-OS to everyone with the sole scope of selling more Windows-driven Tablets (will never happen, by the way, since an Android one, or Mac for what I care, will always be more or less 1000 times better than a Microsoft tablet), but they are also trying to cover the shortcomings of their own system by simply not telling that there was something that went wrong? (What, where, how and most important: why?).

So, while the Laptop was trying to gulp down that whopping Gigabyte of data over WiFi, I had all the time to write this article, where another surprise was waiting for me. This time a nice one.

I use WordPress (WP) for this blog, because it’s simple, can run on a simple system, doesn’t have a steep learning curve and it’s not as complex as the various Drupal, Joomla! and the likes.

It nicely fits the scope, so why use a .50-cal sniper rifle to swat a fly? (unless that fly is more or less 4000 meters away, which is approximately the maximum range of a .50 cal Barrett M82 version M107).

But besides the practical considerations on the choice of this CMS, today it was time to update WP.

This meant downloading a package (very small) to the remote server (the one at the hosting company running my websites) and then automatically have the WP engine unpack it, upgrade its own components (does NOT require a restart of the program or browser, something that every Microsoft product seems to require), and eventually it also updates the MySQL Database behind the scenes (also this does NOT require the restart of any component whatsoever, except a 2 seconds DB-refresh).

All this was accomplished in less then 2 minutes and 0 restarts of any program.
People at Microsoft may start learning from this… Then again: it would not be called Microsoft anymore if they did.

The funny surprise started when the WP dashboard loaded and showed the latest changes.

The one that made me really smile was again a criticism on Microsoft and its products.
Was it just coincidence or is it finally becoming common knowledge that Microsoft products suck?

One of the enhancements to WordPress was that no matter what crap comes into your WP post when you copy-paste text from Microsoft Word, the WP engine will “strip” all the Microsoft Word crap and leave you with a clean, untouched text, with the format and the right (CSS) styling that you chose for your post(s).

And they even put it black on white: 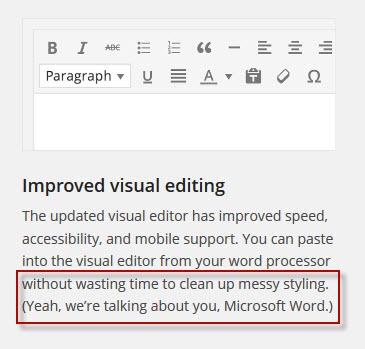 So actually, my Easter Sunday started to look like Christmas, with presents and all…

The weather is excellent and almost warm, I had a good laugh at Microsoft and I got once more reassured that I’m not a freak just because I use Linux as much as I can and limit the use of any Microsoft product to the least necessary evil and only when everything else fails.

A perfect Easter Sunday after all…