ome on, there’s no sense in denying it… It has been calculated that adult males think about sex at least once every hour.

This seems to me quite an “urban legend”.
I mean, “adult males” is pretty generic.

And how in heaven’s name have scientists measured this frequency?

Let’s try to put a couple of facts together:

The calculation must have come from some sort of statistical analysis.

The above, in turn, means that:

The investigation group is also pretty vague: try to imagine the results from the same investigation made under say 20.000 representatives of the following groups:

And finally, which method has been used to measure the results?

Imagine for a second what the average data collection would look like.

Try to picture it within your mind.

A:
“Do what?”  (once again trying to look completely innocent and in control)

Q:
“You know… thinking about sex” (the irritation is now being replace by a less pleasant tone and a ‘wink-wink, nudge-nudge’ smile)

A:
“Well, dunno… but now that you mention it…” (even with best intentions you can not fake anymore)

Q:
“So you were thinking about sex”  (now definitely triumphant and obnoxiously smug)

Then a silence lasting a couple of minutes.

Q:
“And…?”  (the eyebrows are now definitely raised and he makes no efforts to hide a malicious grin)

A:
“And what?”  (if you were already just irritated, you are now undeniably pissed-off)

Q:
“You know, just like a while ago…” (once again the ‘wink-wink, nudge-nudge’ grin is there)

A:
“Well, I wasn’t. But I’m surely doing that NOW..!!” (The last word sounds in between hate and desperation)

Q:
“Ok, ok. So you do think about sex…  (doing as if scribbling down something).
Hmm… let’s see…  (almost seriously thinking).
Wow! That’s twice in 10 minutes.  (he tries to look positively surprised, failing miserably).
Good lord…”  (with a tone as if someone just asked if he believed in fairies)

Do you really think that this is an objective way to measure such a thing?

And if it’s not, how the hell would you suggest to measure that?

It should be clear by now that the question whether or not a man thinks about sex every hour, cannot be answered.
That is, not in an objective or scientific way, at least not one that takes into account all possible variables.

But then again, we should always keep in mind the words of my high school math teacher:

“Statistics is the science according to which, if I eat two chicken and you eat none, then we both have eaten one chicken… so don’t complain if  you’re still hungry…”

This means that statistical sciences will invariably fail to provide an adequate answer to our questions.

So to the question: “What’s on a man’s mind?” the answer can only be: Look for yourself… 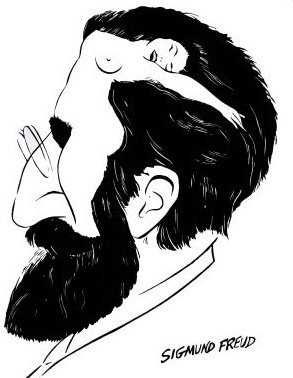