n retrospective, it is rather difficult to pinpoint the precise moment when a particular state of mind begins and in most cases, it’s practically impossible or at least very difficult to say what exactly triggered it.

Personally, I find music a kind of instant slingshot for my states of mind.

Music also played a key role in those years when a boy became a young man, on his way to adulthood.

Fortunately for me, there was so much going on in music-land during those years that my friends and I were confronted with such a wide spectrum of different experiences, thoughts and harmonic forms that all those impressions made us shiver with pure excitement.

Those notes hit us right between the eyes and straight through the heart. They remained indelibly carved into our very beings, never to be forgotten or ignored.

That is why music can have such an effect on me. But also the other way round is true: when I am in a certain state of mind, I can almost immediately hear a particular music that is associated with it.

I never agreed with the definition of “objective” music, according to which a music can be categorized as “good or bad” by following a rational, almost clinical series of definitions, conditions and parameters.

There is nothing objective about music, and that is exactly why it is so wonderfully diverse. I like to think that there are as many variations in music as there are atoms in the Universe and moreover none of them is exactly good or bad.

Music is like Schrödinger’s cat: we cannot possibly know if it is dead (bad) or alive (good) until we let it out of the box and judge for ourselves.

I like quotes, misplaced and not, and for the occasion I will use the epitome of wrong quotation: I’m going to quote myself, as I wrote on one of my online pages:

Beispiel Nummer zweiundzwanzig
(are you getting the hint?)

You can think of music in (more or less) objective terms only if you, for example, say that a series of waves, denoting specific vibrations at a specific frequency, are carried through the air.

These impulses are subsequently transmitted by neuron chains to specific regions of the brain, where the neurochemical impulses are decoded into the signals that we consciously perceive as “sounds”.

Well, the above is the objective description, but at this point there is no substantial difference between a perfect D-sharp-diminished chord and a fart (try to fart in that tone and you’ll be in the Guinness Book of Records).

Music can bring up memories, let the rhythm of your hart accelerate or slow down, it can even get you depressed, excited, hyperactive, or soothe you into sleep, hypnotize, sharpen your perception or, quite possibly, just bore you to death.

We just cannot say “this or that music is good or bad”. The only thing we should say is: “I like, or don’t like, this or that piece of music”, which implies a subjective appreciative statement.

That’s why talking about music is per definition a non-objective discussion.

Are you still with me…?

It should be clear by now that I do not listen to music very lightly or just because I have nothing better to do. And please, do not think that I’m a composer or something… I cannot even read notes!

My world and my life have a soundtrack, and all my memories have one or more pieces of music associated with them.

Entire periods of my life can be reduced to a playlist, if you want.

Some may find the idea depressing.
I find it one of the most stimulating things in life, not only as such, but mainly because this playlist can be changed, it can evolve with the specific moment in time (past or present) or the particular moment when the thought is turned towards it.

There’s nothing more exciting than listen to a track and immediately being carried back to a particular period, a scene, an encounter, complete with dialogues, scents and even flavors.

I hear the music and I immediately see the images and re-live the experiences, see the people, hear their voices, even smell what was around us. In reverse, when something happens I can immediately bring up from memory a particular piece of music or a whole album and put it in the background, just like a soundtrack would play during your favourite movie.

That may also explain why I sometimes cease to consciously see the world around me when I’m listening to music (I mean, really listening to it). That’s because I’m back to a particular day or moment in life that I strongly associate with that track or musical stream and I’m practically re-living it.

And that is exactly what happened a few hours ago.

While listening to some excellent tracks by Polyrock and John Foxx, I was brought back to the best years of my youth.

Oh yeah, we were really ‘post-modern’, or at least we tried to be so without risking to be too conspicuous (because no matter what, we were still a bunch of very shy guys and too much attention could easily break us).

I’m not even sure if any one of us actually knew what ‘post-modern’ meant. As a matter of fact I think no-one really did. Or better: a lot of people think they know and they all end up saying something different about it, so in the end we still haven’t got anywhere.

I’m inclined to think in a similar direction as Umberto Eco and Jean-François Lyotard and say that post-modernism is, especially in music, more an attitude than a style or a period (in history).

Yeah, nice and clear indeed… But this is how we experienced it:

We dreamed of a world like the one into which Rick Deckard (the ‘Blade Runner’) moved.

Maybe a little less rainy and a little bit brighter, but almost as desperate and alien, shaped into that form by some undefined but ever strong human desire for self-destruction that is often mistaken for ‘progress’.

In this almost black-and-white world with strong splashes of colored light, we could be anything.

…A secluded hero, or perhaps someone like the anti-hero Harry Tuttle  (if you have no idea whom I’m referring to, just go ahead and Google it).

And we also dreamed of finding our own beautiful Rachael. 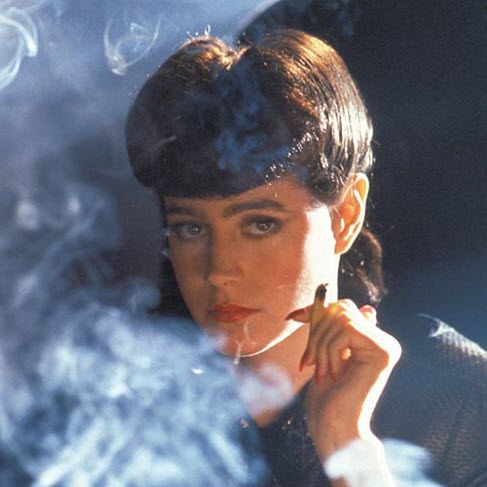 Obviously, we never lived there, none of us ever became a ‘heating engineer’ and finally (and sadly) we never met her…

But every time we went out for the weekend in our own city, at night, this until then typical Southern European world started to change into the dystopian Los Angeles or New York of our imagination.

On those nights, we became elusive and unrecognized heroes, moving through the unknown and yet familiar streets, under sharp lights and behind deep curtains of shadows, while the notes of Joy Division, Polyrock, Steven Brown, Tuxedomoon, Ultravox!, Urban Verbs and Young Marble Giants filled the confined space of our cars and kept echoing into our minds the whole night long.

We wandered the streets of the old city in search of night cafe’s or underground clubs playing “our” music.

Sometimes we found them.
Most of the times, we didn’t…

We wandered aimlessly among the other people of the night, until hunger, tiredness, desperation or maybe nostalgia led us back home, weary and disheveled.

We laid on our small beds, often with the clothes still on and tried to fall into something between nothingness and eternity (*), but the visions continued in the secrecy of our dreams, and so did the music.

(*) Recognize anything? No? Google it!

And just like during those strange and disquieting dreams, the subtle and softened music kept echoing in our minds, long after we woke up and resumed our every-day life.

Music became the companion of our solitude and because of that, we were not alone anymore.

I dedicate this track to us, the tired and unknown heroes.
It was created in the spirit of those nights and those eternal companions of my youth.

Enjoy listening and watching it. Keep on dreaming and remember that we all have been heroes, if only “just for one day”…

Computers are like Old Testament gods; lots of rules and no mercy.