ho said that architects don’t have sense of humor?

Well I know a few who have practically none, but their numbers would not be enough to define a statistically significant rule for the category.

Take for example the New Market Health Centre in Ontario (Canada), no more than 40 km north of Toronto.

Usually, medical structures cannot be held as example of impeccable creativity. Their design, lay-out and aspect are mostly dictated by functionality and not by beauty… let alone humor.

As a matter of fact, I find it rather difficult to associate a medical structure with “humor”, maybe with the exception of that morbid kind of humor normally exhibited by surgeons and gynecologists telling bad jokes.

I wasn’t able to find out who planned and designed the New Market Health Centre, but they sure deserve a special prize for humor.

Walking around the pleasant greenery surrounding the Health Centre, you wouldn’t notice anything strange. Just a central building with several lateral wings haphazardly connected to the main body.

Appearances can be deceptive…

What you need is a helicopter… or Google Maps.

In fact, when seen from above, this initially dull complex, which you initially thought to be born out of the clouded mind of an architect during a booze-induced drawing spree, shows itself in a completely different light.

It becomes a human shape, something that brings to mind the more famous works by Keith Haring.

I took the image and rotated it clockwise by 90° for a better view. 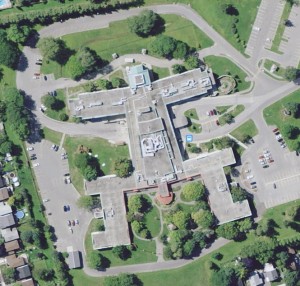 And like Freddy Krüger said in Nightmare on Elm Street 5…:

Everybody gets so much information all day long that they lose their common sense.