‘m not a nerd pur-sang. I actually started as a Dreamer, then an Observer and a Scholar, then Biologist and Photographer, later on Restorer and Carpenter, Refurbishment Technician, then Payroll clerk, CAD draughtsman, Quality Control person, ICT Support Engineer, Senior L2 Engineer and finally Operations Manager.

That is to say that I’m not entirely fond of modern technology, especially the kind that tends to bypass or even eliminate direct human interaction.

While I welcome, for example, e-mail as a means of staying in immediate touch with my fiends all over the world, I’m not a big fan of any so-called “social” media (has anyone any idea about the real meaning of the word “social”, for chrissake?).

Mind you, I do have a Facebook account, but I firmly refuse to post any single idiotic shred of a thought about the last cupcake parlor or what I’m eating, what I’m listening to, where I am at the moment and with whom, and all that utterly uninteresting crap you regularly see on Facebook.

I’m a declared enemy of the “always-on(line)” culture. I don’t have anything to say to the world every 5 minutes (maybe not even every 5 days!), I don’t feel miserable and alone on this planet if I don’t get a Whatsapp every hour and I don’t give a rat’s ass about how many “followers” I have on Twitter, dammit!

Maybe I’m too old, I don’t know… I was born in a world without mobile phones, without computers, where people interacted and talked to each other directly, face to face.

Anyway, I thought I had seen most forms of (digital) human idiocy.

As usual, back from office, I was walking the few meters (maybe 70… tops) between the garage and my front door while savoring the cold but clear air along the canal. At this time the quay is alive with people going home, preparing for a nice dinner out, or just sipping beer or wine with colleagues and friends before going home, or just jogging.

I usually wave hello to a couple of neighbors and go straight home, but today something else attracted my attention, which would soon turn into amazement, and then into disbelieve.

I saw three young people, two girls and a boy, no older than 25, all dressed up for their evening running session in bright sport attires, full of reflective stripes, fluorescent inserts and compression inserts in the most extraordinary spandex galore.

So far, nothing special.

Needless to say, each of them sported an iPod/iPhone arm-strap and each one had earbuds firmly plugged in and obviously, again, each one was talking into the noise-canceling micro pinned down on the running shirt, immediately succeeding in looking like a complete idiot talking to him/her-self.

Normally, I just try not to show my disgust for this lack of respect for another people’s space and just keep walking and send them my best wishes to electrocute themselves at the first possible occasion, but this time something told me there was more going on.

The trio had apparently just slowed the pace to stretch, spaced by no more than 4-5 meters, and all three talking into the damned mics, but not in unison.

And then it hit me: THEY WERE ON THE PHONE WITH EACH OTHER!

At this point, I could not restrain myself anymore.

I stopped, turned to the closest of the three (a sweet-looking girl in dire need of a good sports bra) and, making sure all three could hear me clearly, I gave my best impersonation of Captain James Tiberius Kirk and said: “Beam me up, Scotty… There is not intelligent life on this Planet!”.

They must have taken the message, because they had the decency of blushing somewhat and then moved on without blurting a single word anymore. 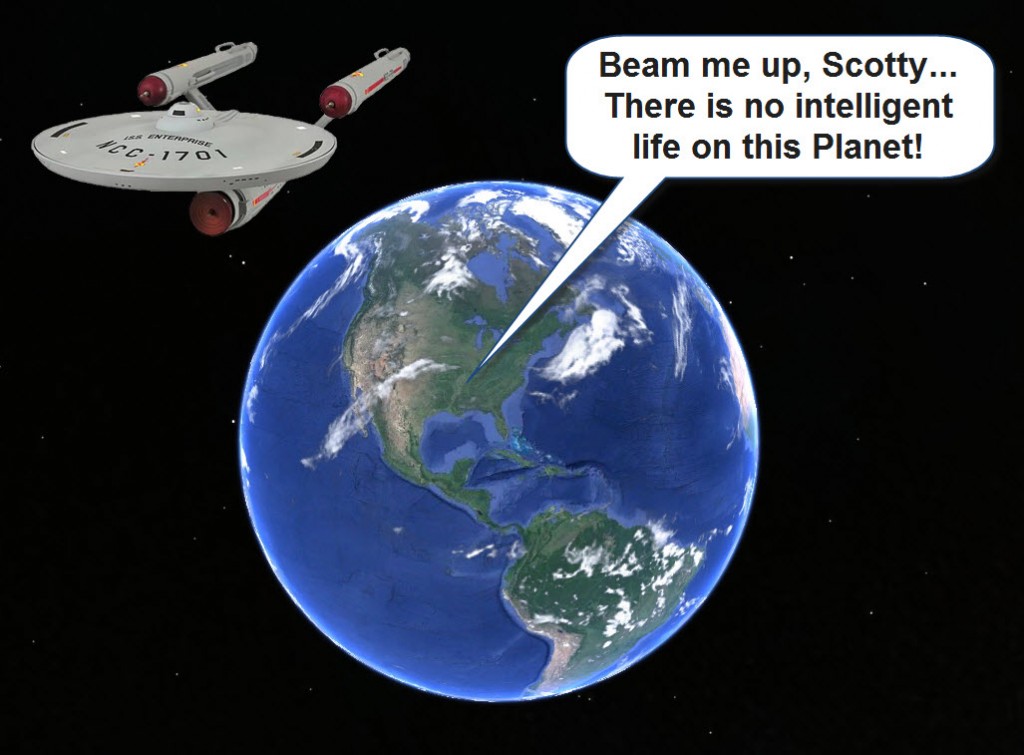 One thought on “Scotty…”