he motorcycle season is barely begun (March 1st, officially) and I have already had enough…

I don’t mean that I’ve had enough of motorcycling, because I adore my bike (exactly the same model and color as the Guzzi Breva V-850 in the picture below) and I try to have some little touring as often as I can, but only two days ago I rode my first proper round-trip (300 Km) through the heart of the Netherlands and I immediately managed to totally and passionately hate a few dozens people. 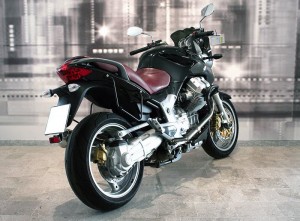 For those not living in the Netherlands, here follows a brief introduction.

It must be said straight away: motorcycling over here is a joy.

True, the Dutch landscape won’t bring you much excitement in terms of long and winding roads (any reminiscence?) because of a simple fact: there are no mountains! Hence no hairpin bends to take with your ear to the ground as far down as you dare (between 21º and 25º inclination on either side, the average biker would probably already wet his/her pants or leave half of the footrest on the asphalt, but that’s another story…).

Therefore, no memorable climbs and descends in order to test the prowess of your gear-shifting foot-hand coordination (unless you can call 60 meters above sea level an altitude, in which case, I urge you to have a better look at the movie “The Englishman who went up a hill and came down a mountain“).

Moreover, there’s an overflow of road signs over here, all aimed at forcing you to take the nearest highway, while all you want is to happily take the longer and more picturesque route, instead.

You can expect those everywhere: from a busy highway, to a village green, down to the most desolate and apparently deserted polder road in North Frisia. They’re everywhere, together with an entire legion of police cars and motorcycles in civvies armed with portable speed laser guns, cameras and whatnot, which means that you can better keep a vigilant eye on your speed.

All these things aside, the Dutch traffic laws will, on the other hand, officially “tolerate” motorcycles parked on the curb and not paying any parking money. Each city reserves itself the right to enforce parking money from bikers, but so far none has ever done that, so here you go with the first great advantage you have upon the car-folk.

The same set of traffic laws states that a motorcycle is allowed to overtake queued cars – in a traffic jam, for example – even on a highway, provided that:

This means that while everybody in a car stays still, you can be home right on time for the couch/beer/dinner.

One more thing that the traffic laws do not specifically forbid – here the law is not entirely clear, but everyone seems to agree all the same – is to apply the above set of rules when the queue happens to be at a traffic light. So also here, the motorcycle has the advantage to be the first vehicle to leave on green light and, because of its superior acceleration, to leave everyone else quite far behind.

All this makes riding a motorcycle in the Netherlands a real time saving experience and why not… it gives you, day in day out, the undeniable pleasure to leave a lot of depressed and raging car drivers behind you with few effort or risk, if ever.

But there’s the rub… car drivers are envious, pusillanimous and vindictive, especially those driving the faster/newer lease models by Audi and Volvo, and there are quite a few of those over here.

Generally speaking, Dutch (car) drivers do not care much about speed limits, which are either ignored or very liberally interpreted (despite the aforementioned thousands of speed-cams…) resulting in almost everyone driving at an average speed which is 10-20 Km/h above the current limit.

This is done independently of the type of road – from six-lanes highways to small village alleys… unless they discover that a motorcycle is riding behind them.

The very instant they get you in their rear-mirror… you’re dead meat. No matter how fast they had been driving until then, in a split second they become the most pedestrian observers of the current speed-limit and actually decide to stay 4-5 Km/h below that, just in case and, by the way: that will teach you!

From your elevated position, you’re unable to look them directly in the eyes (through their rear mirror) but you can tell by their general attitude that they are as satisfied as the proverbial cat who just drank all the spilled milk.

You can almost hear them chuckle while at the same time they make sure you cannot pass them, and as soon as the tarmac stripes show that you can, then they immediately accelerate in such a way that you would be breaking the speed-limit in order to outpace them.

It’s a cat and mouse game… and because a biker is always the most vulnerable road user (and most of the times also the brightest), we just let them be and simply curse them down to their fifth generation.

We just throttle back, take the first possible detour and wish them to go and embrace the next available tree, car included.

The story is very simple, you don’t need to be Freud to understand that their stupidity is dictated by envy, pure, simple, moronic envy, as simple as that. They don’t (or can’t) ride a motorcycle and therefore hate all those who don’t need to waste precious hours in traffic jams, who are always the first one in line at the traffic lights and look always so proud and stalwart, even when they are bald, above 40 and with a pouch (which we prefer to hear mentioned as “the love handles”, by the way).

No matter how exasperating their behavior might be, every now and then, we take our revenge.

Like I did two days ago, during my first ride of the season.

I was on a nice country road, with beautiful woods to the left, a small stream and a few beautiful farms with cattle speckling the fields or resting along the hedges to the right. The sun was shining and was already strong enough to be pleasantly warm, the road in front was almost deserted and its gentle bends gave ample room for some hip work and simple, playful vroom-vroom joy.

The road had just changed from an 80 Km/h to a 60 Km/h section, and though there was no line on the tarmac, a sign had just declared the start of a “forbidden to overtake” section.

Reason enough to just relax, throttle back and let the motorcycle fall into the right speed.

However, this was not what the Audi A6 driver behind me had in mind: in less than a minute, he started to get closer and closer, with the clear intention to make me accelerate by sheer fear of a collision.

That didn’t work and I promptly made a warning gesture with my left hand by pulling the extended thumb and index finger close to each other to indicate “you’re too close, move back”.

The Audidiot (an idiot in an Audi, as opposed to a Volvoron, i.e. a moron in a Volvo) started to come even closer to my rear fender, blinking his high-beams, using the horn and at the same time starting to zigzag dangerously, making a complete ass of himself.

Just a couple of hundred meters before a roundabout, he floored the accelerator and overtook, making sure to give me the finger in the process, roaring past with lights ablaze and klaxon on the built-in “fuck-you” stand and almost flew over the roundabout at an incredible speed.

What the Audidiot hadn’t noticed was the motorcycle policeman posted on the left side of the road, also enjoying the early March sun, a dozen meters before the roundabout.

Obviously, the Law Enforcer jumped on his mount, started the chase and in less than two kilometers had ordered the Audidiot to the curb  and started what I suppose was going to be an educational lecture on infringements, violations, misdemeanors and other Law facts.

I had planned to take left at the roundabout, but the spectacle ahead was too alluring and fun to be missed, so I went straight on and drove very very slowly along the Audidiot (now looking like an idiot standing besides an Audi) and the policeman, already writing the fine.

The constable stopped writing in order to give me a conspiratorial smile and a thumbs-up, which I promptly returned. From his grin I deduced that all that writing was going to cost the Audidiot very dear.

All the accumulated irritation towards all previously encountered Audidiots and Volvorons immediately evaporated and I contentedly carried on and finally fully enjoyed being on the road again (I know, horrible pun… but i cannot help it).

Life was good again and the sun never stopped shining… 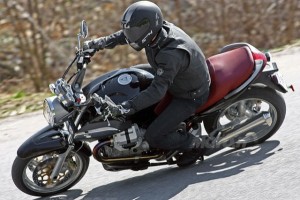 Jazz will endure just as long as people hear it through their feet instead of their brains.