‘m not inclined to talk a lot and often about things or people I dislike. Obviously, things and people who irritate me will have the undeniable honor to be the object of my tirades, sooner or later, but I’m not inclined to repeat myself ever so often.

As I see it, “talking too often about your enemy, only serves to empower your enemy”.

That is why I posted a critic article on Microsoft no less than 9816 hours (409 days) ago, which practically boils down to 1 year and 44 days, in case you still have problems with counting days, hence on April 20th 2014, in occasion of a miserably failed Windows Update, aka “Easter Sunday and Microsoft Updates“.

And today you may say that I kind of forced myself (oh, I can be sarcastic too, at times…) to write Part Two of that article, again about the bloody Windows and again about a very fastidious trait of their monopolistic and downright irritating behaviour, camouflaged as “service”.

Let me first state the obvious: I don’t trust Microsoft.

Personally, I use Windows only because I cannot play my favourite games under Linux (at least, not at the same speed and quality). As soon as I’m not gaming (which in fact represents only a minor percentage of my average computer time), I use Linux and all its free or ludicrously cheap programs with excellent support and flexibility for most of my digital life (yes, also for this blog).

Linux was originally only for hard-core geeks, those pale sub-human species who had to be kept out of direct sunlight in dark basements or carefully shielded MIT college rooms, while now with distributions like Linux Mint (one of my favourites) even the randomly chosen computer illiterate can be at least as productive with Linux as any other computer illiterate on a Windows machine.

Nevertheless, Windows is still used in most cases by the so-called normal people, conveniently collected under the euphemism “average computer user”.

Right, introduction completed… Let’s move on to the matter at hand.

Those using Windows 7 (me) or Windows 8 might have noticed the last couple of days a very annoying icon, shaped in the form of the infamous four quarters logo (in all-white, this time):

The process is called “GWX”, one more nice Microsoft acronym that stands for “Get Windows 10” (being X the Latin numeral for 10).

If you click it, you are treated by the most indecent piece of monopolistic advertisement Microsoft could think of during the last few decades, namely “Get a Free Upgrade to Windows 10”. The first page of this 5-pages long indecency looks like this: 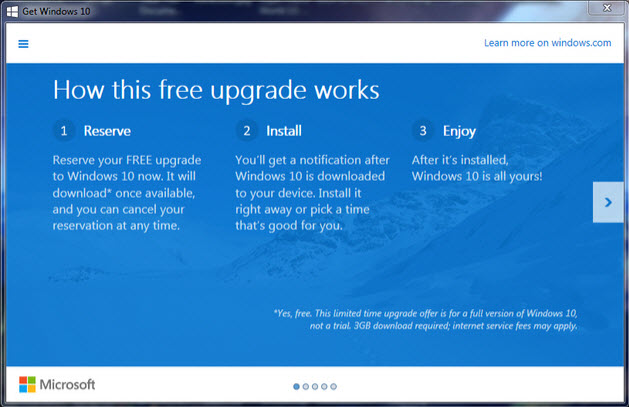 Now, I’m pretty satisfied with my Windows 7 Ultimate (64-bit Edition), despite the fact that it is Windows. It plays my games and I don’t need it for anything else, so why should I trade it for something that Microsoft says is better? When in heaven’s name did they ever managed to get a new Operating System to work well the first time around? With Windows Millennium Edition maybe? Or with the staggering success called Windows Vista? Or with any other OS they made that did not need at least two or more service packs and several Gigabytes of security updates before it was almost safe to use?

I won’t deny that this time they may get lucky, hit the bulls-eye and actually manage to do what they failed to achieve in 33 years of Windows versions and (d)evolutions and actually give us, the “average users”, a well-functioning OS the first time around.

On the other hand: nah, I can more easily believe in fairy tales than in Microsoft getting it right with a new OS…

But say we leave this argument out of the equation.

Why should they be allowed to advertise their product under the camouflage of “update”? Since when an “update” by a serious Company shoves unsolicited advertisement down your throat? Who gave them the right to do so? Normal humans call that ad-ware, which in many cases is considered (by legislation ) as a form of malware, hence punishable.

Nevertheless, Microsoft counts this package as “recommended update”, since this annoying little icon, came down under the deceitful guise of an Operating System Update, to be precise the KB3035583.

The dear Microsoft has by now also removed any traces of this illegal move by completely remove the reference to that so-called “update” from their Knowledge-Base (hence the KB in front of the article number), and all you get when you try to find the reference is a “Sorry, page not found”.

And you know what is its most irritating, rude and downright anti-social attribute? The fact that you cannot switch it OFF!

When you click on this devious bugger, there is nowhere any frakking box, button or link that says: “No thanks, Fuck off. Leave me alone”.

Not even right-clicking the wretched icon gives you any choice to disable it. You’re stuck with it. Period.

Some smarter “average users” may think: Well, you can just open the “Notification Area” (the “Customize” link in the box that opens when you click the little triangular arrow in the notification area, or by changing its settings via Control Panel >> All Control Panel Items >> Notification Area Icons) and select the option “Hide Icons and Notifications”, as shown here below:

Well, this makes the irritating icon disappear alright, but it will also teach you again not to trust Microsoft entirely (how many lessons do you need?), because next time you start Windows, the icon will be back there, and you can start the procedure all over again.

This so-called “recommended update” (yeah right, self-recommended, you frakking shifty MS blokes!) installs a whole GWX folder in System 32, where we can see that at least one of the executables mentions downloading Windows 10. Not only that, but the (so-called) patch itself seems to pave the way for Microsoft to display ads and notifications to users, letting them know when the new OS becomes available (and who knows what more in the near future?).

In the same folder, you can also find what should be a config XML file that goes through the program’s behavior, depending on what “phase” Windows 10 is in. This means that currently the program doesn’t display any notifications because we’re currently in the “None” phase. But as soon as Windows 10 gets to the “RTM” phase, users will most certainly see a new Live Tile show up on their Start Screen, pointing to the upcoming OS (Windows 10) or some form of unsolicited notifications will be displayed when Windows 7 launches, prompting users to upgrade to Windows 10.

So the new plan of action is as follows:

I’m not on a crusade against these people, but I hate to have unsolicited things pushed onto my lap without a chance to say no or to stop them nagging people left and right around the globe.

If Bill Gates had a dime for every time Windows crashes… oh, wait a minute, he already does.