or the Sheldon Coopers among us, I want to make very clear that the title of this post is purely sarcastic, so I hope I won’t need to hold up the “SARCASM” board too often.

For the others (the non-Sheldon Coopers among us), it should already be quite evident that I’m not a big fan of those Micro$oft mobsters who constantly try to push their OS down everyone’s throat. Evidence of my disinclination towards M$ can be found at least here, and here.

Because of the above, I only have at home one PC running W7 which I just use for gaming and nothing else, while all my ‘normal’ work is being done on a couple of Linux machines (except at my workplace, where I’m forced to wear the shackles of a lowly M$ slave…).

So, if I practically never use Windows, then how would I know about the pleasures (SARCASM-ALERT!) of Windows 10?

Well, I share my life with a “digitally-challenged” person, whom I happen to love very dearly. Therefore, my lovely wife does her daily work on a Windows laptop, instead of a reliable and yet user-friendly Linux distribution, like Ubuntu or Mint.

Now her M$ laptop running W8 had been moaning about updating to Windows 10 during the last months and initially I had almost decided to silence the little piece of crap and remove the so-called “recommended update” responsible for the unwelcome pop-ups, just like I had already done on my W7 gaming PC (that story is told here).

On a second thought, I was curious to see the process at work (and gloat at all the crap that was going to be revealed), so I electronically vouched to “reserve your free Windows 10 upgrade today” (oh don’t worry, my dear friends. You will pay. In time… and very dearly!).

Despite this joyful anticipation, I promised myself that I was going to approach the upgrade with an open mind and harboring as few prejudices as I could possibly muster.

Needless to say, my open-minded approach was immediately put to the test when I tried to start the upgrade itself.

I had chosen a Friday evening to trigger it because, despite all the good intentions, I wanted to give the machine the whole night to download and install the packages (supposing that at least that process could be done without human intervention), furthermore allowing myself to have the whole weekend to intercept all the unavoidable crap that was bound to hit the fan.

So I closed my eyes and hit the “Download and Prepare Upgrade” link, which immediately triggered a happily spinning “please wait” prompt in a pretty (SARCASM-ALERT!) pink background.

I am very well aware that I have little bandwidth and that moreover the upgrading laptop was doing all that over the WiFi, but I thought I could come back in an hour or two and see something else than the oh-so-fashionably pink “work in progress” screen. Three hours later I stood corrected and decided to leave the poor thing to rattle on during the night.

Ok, maybe the fact that W10 had just became available could have been a hint in itself about the huge numbers of poor idiots all trying to do this upgrade at the same time, but in my infinite trust in the Seattle Giant (SARCASM-ALERT!) I thought that Micro$oft must have thought about that and put some extra resources together…

None of that. That was certainly not the case.

On Saturday morning, the darn thing was still churning empty air without any appreciable progress. That was the moment when I seriously considered installing Linux Mint and then tell my wife it was the new Windows 10. Only the fact that my wife is too smart to believe such bullshit kept me from carrying out my plan.

So I forced-shutdown the machine, verified that W8 was still working and then postponed the whole by one more week.

And once again I started the upgrade and this time (oh wonder!) the little laptop started to show some measurable progress.

Now, the point of all this lengthy prologue is that after such a long time waiting, procrastinating, idling and whatnot, one is tempted to rush through the setup screens. Especially when that untrustworthy bunch of M$ gangsters shows in front of it all a screen like this:

I had almost clicked on that beckoning “Use Express Settings” button, when I slowly (it was Saturday morning, after all) but steadily regained my wits and decided to spend some more time and look into those settings myself and only then decide what to select.

And indeed… it’s almost incredible what a disgraceful violation of privacy those settings would put in place.

I won’t dwell too long on each of them, but I will just highlight a few “gems” that I hope never to see in the setup of a serious OS.

The first group of settings to be handled is the one dealing with Personalization and Location.

If you leave it to Micro$oft’s “Express Settings”, you would be doing the following:

WHOA! STOP! WTF! ARE YOU JOKING?

Sending my contacts to Micro$oft, together with all the info on what you do, when you do it and with whom? Yeah right, why don’t directly send them also your bank and credit card pin codes as well… I’m sure they will keep them much safer than they are now, embedded in your own brain cells. Oh, yeah, I just forgot to mention that point #4 roughly translates into: Micro$oft reserves itself the right to sell the data on your shopping and browsing behaviour (and what more?) to anyone, in order to “improve the experience across apps”.

Alright then, why don’t you just bend over and wait until anyone screws you up? Any volunteers? Oh yeah, Micro$oft is first in line…

And then the Location Setting… just tell me why in heaven’s name would I let the whole world want to know where I am, least of all Micro$oft?

All the above settings should be put to OFF and left to rot there. If Micro$oft wants that kind of personal information, the least the can do is to pay me big money and even then, I value my privacy above their blood-money.

The next screen is about the Browser and Protection Settings, together with Connectivity and Error Reporting. 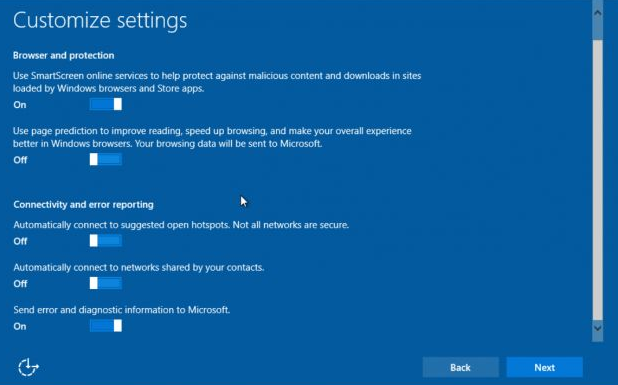 In this screen, you may perhaps leave the SmartScreen option “ON”, since it is meant to protect the users against “malicious content and downloads” (on the other hand: since when is Micro$oft a serious provider of solid and honest security software?). It must be said that SmartScreen will only work with the new M$ Edge browser and if you are smart, you would be doing a good thing by ditch Edge and only use Firefox (in which case you could also set this setting to “OFF”).

I guess you could also leave the page prediction enabled if you really want, but once again, this setting works only with the new Edge browser so if you use Firefox (or Chrome for what I care), this setting is of no use to you and setting it to “OFF” will probably close one more potential weakness in this already Swiss-cheese security OS. Since I hope you are smarter than the average paramecium, I hope you will install Firefox and turn the prediction service “OFF”.

The last option “send error and diagnostic information to Microsoft” is really up to you. If you don’t want to share this sort of information with them, then turn this one also to “OFF”. It won’t influence in any way the fact that you will still be regularly confronted by errors and that whatever you do, Micro$oft won’t do anything to fix them. Oh, sure… they will send down another “security” or “essential” update for you to download, which will invariably require you to reboot your computer (again!?!?) with the only result of making it more unwieldy, hulking and slow then ever before said update. 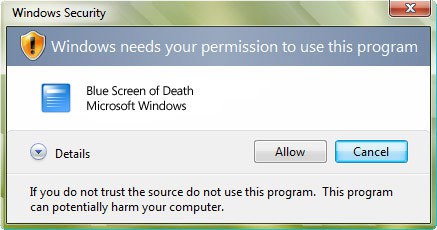 If after all the above you still think that “Express Settings” are your best choice, then by all means go ahead, be my guest. You probably deserve every single one of them…

Technology is a word that describes something that doesn’t work yet.