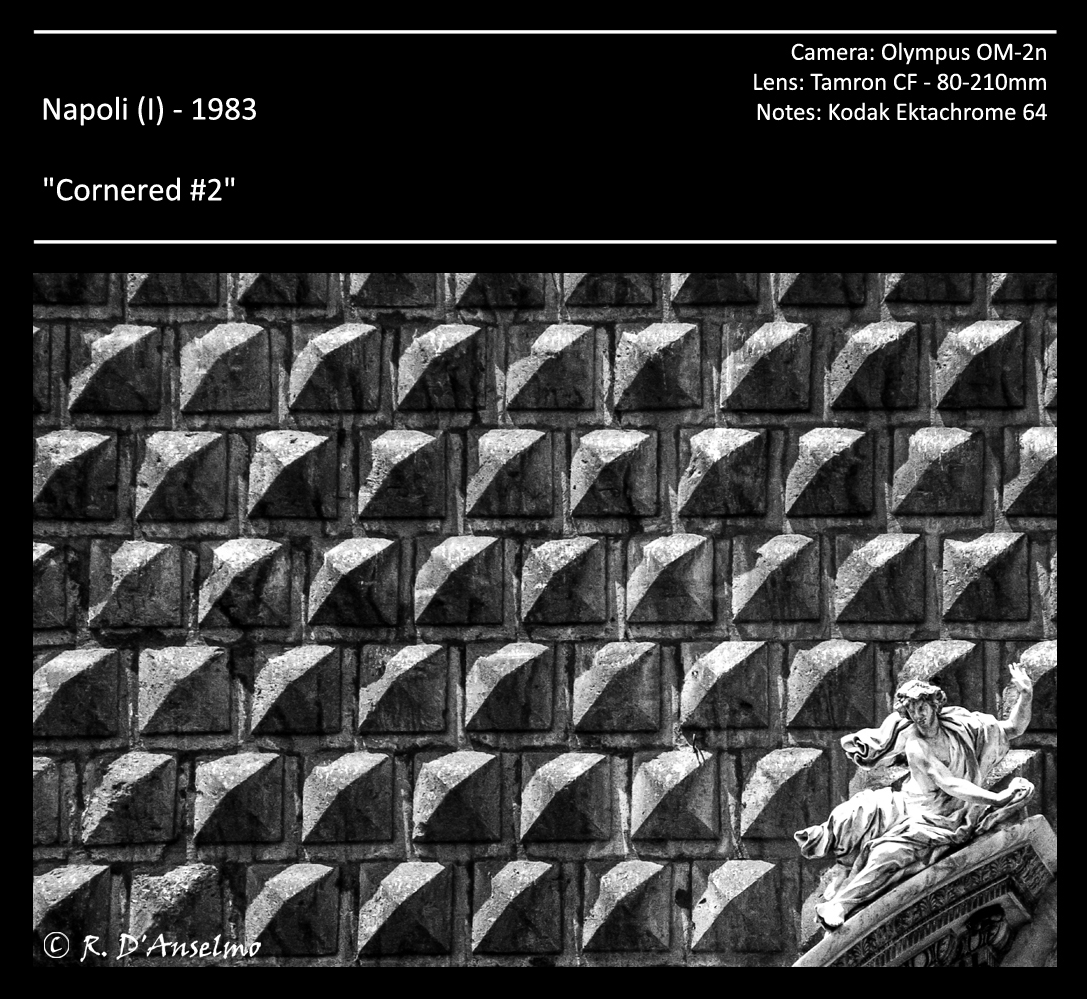 could spend hour after hour admiring the beautiful historical façades of Naples’ palaces and churches in all their details and styles.

They speak of the grandeur of a city that has been for ages, and surely during the 17th century, one of the most prosperous and advanced (scientifically, artistically and culturally) capitals of Europe.

I have spent many an afternoon, in between university colleges, roaming through the streets of the historic city core, surrounded by marvels of the most beautiful examples of architecture, each one of which would deserve a full portfolio.

The photo depicts a detail of the façade of the Chiesa del Gesù Nuovo (also known as Chiesa della Trinità Maggiore) – Church of the New Jesus; aka: Church of the Greater Trinity.

The façade belonged originally to the Palazzo Sanseverino – Sanseverino Palace – completed in 1470, though none of the owners of the palace was very fortunate with it, having all of them at some point or another lost it, either because of financial or political disasters, until between 1580 and 1601 it came into the hands of the Jesuit Order, who decided it would be transformed into a church, leaving the façade intact and building the holy edifice behind it.

The original entrance to the palace became also the main entrance of the church, but its austere character was modified at the end of the 17th century by baroque marmoreal additions in the form of bas-reliefs, an interrupted upper-frieze with a heraldic coat-of-arms flanked by two putti and two larger angels on the sides of the frieze.

The left angel seems, with his outstretched left arm, to fend off something, while his averted face bears an expression of resigned serenity.

While standing in front of this intriguing monument (for something like 20 minutes, during which I probably had been declared insane, or at least dim-witted by at least a few dozens passers-by) my attention focused more and more on the angel on the left and his gentle, almost desperate gesture, which I’m sure was very far from the intentions of the sculptor.

I framed the composition so that this flamboyant baroque angel is at the edge, surrounded on all sides by this repeated and severe background of square projecting bosses.

That gave me the idea that the angel figured out he was cornered and could not leave this place, which many call a paradise on earth (“vedi Napoli e poi muori – see Naples and then die – and other similar nonsense) and it’s explicitly the feeling I tried to convey, not by portraying the decay or the poverty of large parts of the city, but in a way that looks more like an allegory.

It was my intention to find a gentle way to represent my unfaltering love-hate relation with this beautiful, terrible city.