long time ago in a Galaxy far, far away… a very smart biped humanoid living on a small planet at the periphery of a spiral Galaxy, created what was bound to become a vast Empire, not only for its Galactic dimensions, but mostly because millions of other biped humanoids would be influenced by his creation.

And so, the heterogeneous progeny of the Nerds & Geeks was born.

This progeny may have existed long before the Star Wars movies hit the silver screen; maybe each Century has had its own Nerds and Geeks, only that they may have been called differently each time.

The Star Wars movies, franchise, spin-offs and whatnot, have been around since the end of the 70’s and gave birth to one of the largest and most widespread sub-cultures on the planet… ever.

Ok, Trekkies (Star Trek fans, if you still have no clue) may say they are the largest sub-culture on the planet, but I dare to doubt that.

Maybe because I’d rather be seen near a young Princess Leia, than a serious Mr. Spock, with all due respect and admiration for his Vulcan logic.

We all know and admire the main Star Wars (humanoid) characters, but I’m probably not too off-target if I say that we are all particularly endeared by the droids.

In particular R2D2, the little droid that is bringing so much comic relief during rather serious situations by bleeping and raspberrying the equivalent of censored F-words, is such a loved character that it has a personal army of groupies within the Nerdic Empire.

And so R2D2 memorabilia are among the most sought after of the whole franchise.

One thing Nerds & Geeks have never been famous for, was (good-looking) girls. C’mon, let’s be honest: girls have been as alien to Nerds & Geeks as a screaming Wookie in the middle of the Vatican.

Fortunately, during the last decade, this has finally changed, with more and more girls joining the Nerdic Empire.

Nowadays, the franchises are discovering the sexy side of Nerdom  and therefore it must not surprise us when a very smart designer creates an R2D2 swimsuit and tank-top, obviously designed to be worn by the female part of the Nerdom.

It’s not something that can be only worn at the Annual Geeks & Nerds R2D2 Cosplay Convention. You can actually wear it anywhere without being called geeky, nerdy or dorky.

As a matter of fact, most people would not even recognize the suit graphics as belonging to our little beepy droid until you tell them!

And even so, who the hell cares when you see something like this? 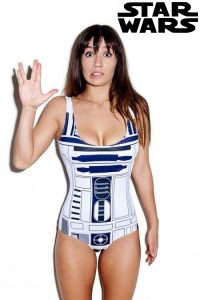 To err is human, but to really foul things up requires a computer.