omehow, the Bonzo Dog Band could be considered just one more English Art College band, but this would be restrictive and would not mirror the incredible creativity of its members.

It is true that it saw the light at an English Art College, though…

It all began between 1962 and 1965, when Vivian Stanshall and Rodney Slater started to play sessions in the canteen of the Royal College of Art calling themselves – simply – Band.

What they were playing at the time, it’s still an unsolved mystery.

Simplicity was not an attribute that fit the duo, so they almost immediately changed the meager “Band” name into the more boisterous one of Bonzo Dog Doo-Dah Band.

The name in itself doesn’t rhyme with the tradition of the at the time emerging rock and underground bands. 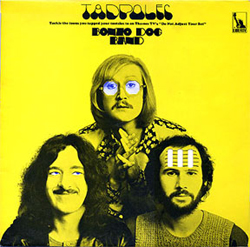 Let’s see what we can get out of it.

Bonzo Dog is the name of a famous post-card character, created by George Studdy.

This little chubby white pup with sparse black spots, a stubby tail and big blue eyes, was a kind of “everyman”, a man-in-the-street symbol, and denounced all forms of pomposity.

He drank, gambled, and had a wicked eye for pretty women, but Bonzo was never violent, never spitefully unkind, and absolutely never repulsively offensive. 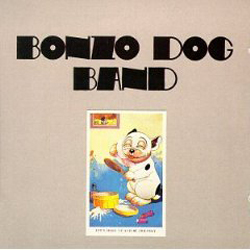 The character was depicted in a way that it always stole a smile or a laugh from the viewer and was a real rage in the late 20’s and early 30’s.

It’s perhaps not a coincidence that many of the Bonzo Dog Band’s melodies will be directly taken from the musical repertoire of that period.

The “Doo-Dah” may have here a double meaning.

On one hand, it is just the phonetic summary of all kind of music that people like to hum along, whether or not they know the words.

The word’s intrinsic rhythm recalls the Vaudeville tunes and other playful music of the 20’s and early 30’s, including all sorts of cabaret, music-hall, novelty songs and possibly the French Café-chantant. 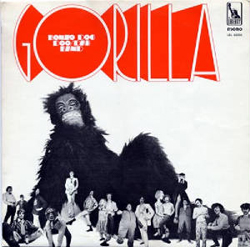 On the other hand, there is an almost onomatopoeic reference to the Dada anti-art movement, which could be a bit pretentious as such, but in this case it fits perfectly with the kind of music that these two gentlemen had in mind.

The duo soon became a vast ensemble, collecting its members all over the London area’s Art colleges. 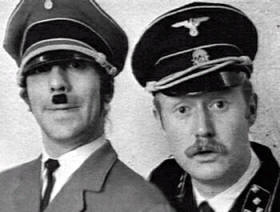 Once they completed (more or less successfully) their art courses in July 1966, they were ready to take the big step and become professional artists-musicians-comedians-whatever.

The period saw an explosion of music, new expression fields, a total liberation in arts and a complete chaos sweeping all over stiff-upper-lip Albion.

Everybody was trying to start a revolution and everybody had different ideas about how to get there, but no one had a precise idea where “there” actually was. 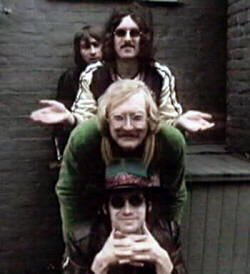 …Neither had the Bonzo Dog Band (abandoning the rather pompous Doo-Dah somewhere underway).

They did not know themselves where they exactly came from – artistically speaking – while Vivian Stanshall cited, with apparent ease, something in between The Alberts and the Commedia Dell’Arte.

It is in the early 60’s that we can find the Bonzo Dog Band playing in almost every pub of the London area and in most clubs of North-East England.

Their idiosyncrasy with being associated with “The New Vaudeville” pushed them in the direction of rock music, but they never got there completely.

By 1967 they had made big steps, from the obscure pub circuit to renown clubs like The Flamingo and Paul Raymonde’s Revue Bar, mostly playing compositions by Vivian Stanshall and Neil Innes, together with classic songs of the 20’s and 30’s, but then in a style of their own.

Their anarchic, highly visual shows and caustic texts appealed to the underground music audience that was just forming at the UFO Club.

It is already in 1968 that they made their first UK Top-5 Hit with I’m the Urban Spaceman, appearing on National TV in “Do Not Adjust Your Set”, where they performed many of the songs that will appear in their third album Tadpoles.

The Bonzo Dog Band went on by playing in a couple of almost-disastrous tours in the USA (let’s be honest: the States could have never been ready to even remotely understand, let alone appreciate, that kind of hysterical-histrionic humor) and on several UK TV-specials, like the Christmas special “Do Not Adjust Your Stocking”, but the audience was not really appreciative of these half-mad comedians.

The only people that could really value the band, was the cast of Monty Python, with which they more or less teamed, individually or as ensemble.

But eventually, in 1970 the Bonzo Dog Band officially ceased to exist.

Their music still carried on by some of its members, like Vivian Stanshall or Neil Innes (the most prolific of the whole bunch). 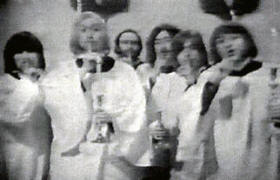 Among their masterpieces of absurdity, we must remember their first album, Gorilla, with delicious pieces like Cool Britannia, Jazz delicious hot, disgusting cold, Jollity Farm and I’m bored.

This one was soon followed by The Doughnut in Granny’s Greenhouse and Tadpoles.

Keynsham, is already a trifle under-beat, but episodes like Tent or We were wrong cannot fail to bite deep in.

Many “collections” and “best of” will follow, with one original album in between: Let’s make up and be friendly.

These comets have left some of the most deliriously energizing albums of the rock history and they cannot possibly fit in a specific category. 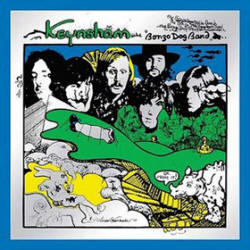 Actually, their music doesn’t fit anywhere either, just like the members of Bonzo Dog Band themselves. Their love and predilection for absurdities makes it impossible to constrain them into tight definitions, no matter how hard we try.

You love them, or you think it’s rubbish.

On the other hand, just like Vivian Stanshall shouts out at the end of The Morse Code Melody:

“…Rubbish? It may be rubbish but, by Jingo… it’s English Rubbish!”