lmost unknown to vast audiences, this band deserves to be mentioned in one breath with the illustrious and perhaps most famous names of the Canterbury scene, like Gong, Egg, National Health and Caravan.

And illustrious are also the names of Arzachel’s members: Simeon Sasparella (aka Steve Hillage) on guitars and voclas, Sam Lee Uff (aka Dave Stewart) on keyboards, Basil Dowling (aka Clive Brooks) on drums and Njerogi Gategaka (aka Mont Campbell) on bass and vocals.

They form Arzachel in 1969 (as a spin-off of Uriel) and their music is linear, but rather difficult to describe in terms of its temporary placement.

So we’re talking about 1969. Keep that number well in mind…

Their music contains many threads and harmonies that will be used by other groups only a few years later.

For example, the first track of their first (and only) album has been compared by some critics to the later Pink Floyd and by others to the better Hawkwind tracks. 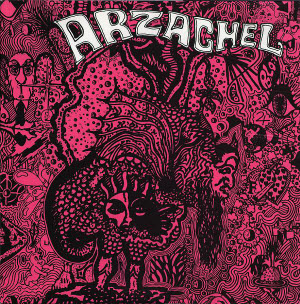 On the other end of Arzachel’s musical spectrum, you can find truly psychedelic pieces, but then again some extended bars here and there that are reminiscent of a few Continental experimentalists like Can or perhaps even Amon Düül.

Under the above assumptions, do not listen to Arzachel and immediately say: “Oh yeah… they are copying Pink Floyd” or “Well, this sounds suspiciously like Can”, because you would be making a big mistake.

Arzachel was there before Pink Floyd and Can reached their (musical) maturity, so maybe you should think the other way round.

Unfortunately, they have left no more traces of their interesting musical universe and the musicians will go their own ways, each one keeping on the crest of the waves by joining more or less famous formations like Gong (Steve Hillage), Hatfield & The Norh (Dave Stewart and Mont Campbell), National Health (Dave Stewart) and Groundhogs (Clive Brooks).

The rest (Canterbury and further) is just history, and Arzachel wrote a short, but excellent chapter of it…

Technology is anything that wasn’t around when you were born.