ne of the shipwrecked bands from the second half of the 1960’s.

Because they left their original and fresh mixture of rock, blues and country of their first album to take the boring and quite predictable paths of the Heavy Metal. A choice which, I’m afraid, they have paid with anonymity.

Perhaps they did not have much else to say either.

Nonetheless, their first album, In from the cold, is hard, steady as granite and stands as a monolith. 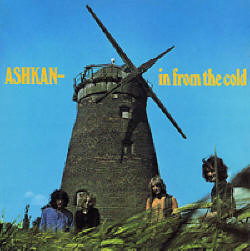 Steve Bailey was a little inclined to overdone vocalism, but he overcomes the “Robert Plant-feeling” by offering us his raw timbre and indisputable vocal power.

The other members are slightly above average, technically speaking, and have also decent doses of creativity.

The entire album is a nice exploration or, perhaps better, a contamination of Blues, Country, R&B and hard Rock sounds.

From the first energizing Going home, where we are treated to a first encounter with this raw sound, down to the last track, the music does not cease to entertain.

I doesn’t amaze or stupefy, but it stays true to itself.

It’s a pity that Ashkan will not succeed in staying on the verge of their own creativity.

On the other hand, they had put themselves in a restrictive corner, which will become more and more crowded, smothering the weakest.

They will completely disappear from the known musical scene.

Better that, than a continuous repetition of a mediocre “safe formula” like many other Heavy Metal bands.

Knowledge is knowing a tomato is a fruit; Wisdom is not putting it in a fruit salad.