his band is born initially as “Bakerloo Blues Line”, musical pun of sorts about the Bakerloo line of the London Underground (from Elephant & Castle to Harrow & Wealdston), though I’m not entirely sure what role is played by the blues in all this.

In 1968 David “Clem” Clempson (guitar) and Terry Poole (bass, vocals), teamed up with drummer Keith Baker and formed the core of Bakerloo. In this lineup they toured in the “Big Bear Folly Tour”, together with Locomotive, Tea & Symphony and Earth (later to become Black Sabbath… ugh!) and figured as support band for the live debut of Led Zeppelin at the Marquee Club.

So the start was done in style and in quite good company.

After a couple of singles in 1969, they recorded in 1970 their eponymous Bakerloo album. 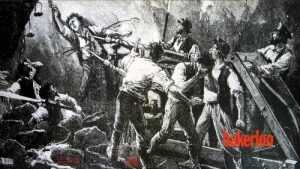 Bakerloo is a sensible and well calibrated mix of blues, progressive rock and British jazz and the usual wink to classical music, with here and there some harder accents, which reflect future choices of its members.

Despite the fact that the reviews were positive, especially for a debut album, by the time the album really hit the market, Bakerloo was already starting to crumble down.

All three members had in fact decided to go their separate ways: Clempson moved on and joined Colosseum first and then Humble Pie (where he replaced Peter Frampton).

Poole and Baker will form (the much nicer, to my taste) May Blitz, but they will leave this band as well even before it could sign the contract for their first album. Poole played with quite a few bands, among which the most famous were Vinegar Joe and Graham Bond Organization, while Baker first joined Supertramp and then moved on to Uriah Heep.

So not much was lost, maybe some was gained and in the end, only one Bakerloo album remains to testify the validity and limitations of the “power-trio” concept.