his band, between rock, jazz and blues, refuses the definition and constraints of a particular musical genre.

The band’s full name was: “Pete Brown and his Battered Ornaments”.
Their first album, A meal you can shake hands with in the dark, already gives an idea of their musical versatility, between jazz, rock, blues and afro. An album that is already a promise of great things to come.

However, the continuous frictions between Pete Brown and Chris Spedding over the band’s musical direction, resulted in Brown being fired and the band facing an uncertain (musical) future. 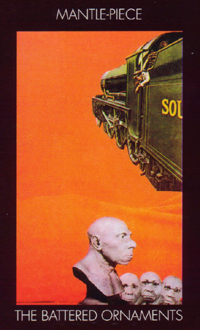 Vague and contradictory references to the “soul-train” are alleged to the album’s cover. Some say that it’s just the “Southern Pacific” railway logo (makes more sense to me, too…), some others want to see a link to soul music, a phenomenon still to come.

Who is right?… We’ll never know.

Ahmad Khan’s clean and measured sound will contribute in a significant way to the creation of this music, something that will make Mantle Piece a distinguished episode, though difficult to describe with words.

Hereafter, The Battered Ornaments will actually cease to exist.

One more single, under the name Chris Spedding and the Battered Ornaments in 1970 and then the real end.

All members will enrich many formations as session men, or sporadically encounter each other in larger ensembles, while the name “Battered Ornaments” will soon fade into oblivion.

Fortunately, Mantle Piece still remains; a musical heritage that should be rediscovered in all its nuances.

The Miss Universe pageant is fixed. All the winners are from Earth.