ick Abrahams, Jethro Tull’s talented guitarist, left Ian Anderson & Co. soon after their first album (This was, in 1968), because of his disagreements with Anderson about the band’s musical direction.

After a quite a few concerts, some short rehearsal period, and an incredibly long series of studio sessions, their first Ahead rings out is released in 1969.

For a debut album, it offers an already mature musical product, perhaps facilitated by the great concerts that preceded the studio recording. The feeling, however, is that the band has spent too much time in the studio refining every single passage hundreds of times. The execution is impeccable, but the impact and feeling of the live performances is practically lost in the almost aseptic perfection of the final product, though the jazzier tones manage to smooth out the harder rock matrices of the live performances. 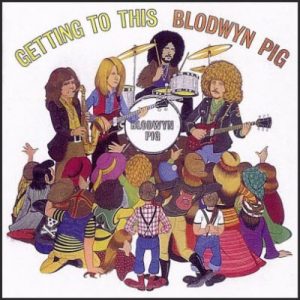 The second album Getting to this comes out in 1970, unfortunately going back to a harder rock component that is not tempered anymore (or enough) by the R&B matrix. This may have been a choice tied to the changing times, where hard rock was becoming more and more popular (and profitable!). Nevertheless, Blodwyn Pig does not sell and disbands soon after.

In later years they will re-form and even manage to release two more studio albums, Lies (1993) and Pig-in-the-middle (1996), but they are not even a pale shadow of what Ahead rings out has been, so better leave those two alone.

Musically, Blodwyn Pig ends after two valid albums and that should be enough said. Enjoy them for what they are and then move on, without regrets.

Always code as if the guy who ends up maintaining your code will be a violent psychopath who knows where you live.