hey were already known in New York during 1966 for being among the first formations daring to play acid rock over there.

These guys, all from the Bronx, entered the stage well dressed and with perfectly combed hair but with a web of tiny electric lights all over their clothes… And their music was the best you can imagine.

The first album Psychedelic Lollipop sees the light when the word psychedelic is still something that astonishes and confuses.

A note on the back cover advises to set the volume to the maximum.

It is sold in thousands of copies to almost every acid freak of San Francisco, while the sales are not that great in the group’s own area (East Coast).

Though the sound is rough and scratching to the bone, their music is articulated – however sometimes technically uncertain – and moves into the vast spaces of rock, afro, blues, jazz and R&B.

All those styles were not just merely “used”, but melted together and adapted to the group’s own character and will to experiment. 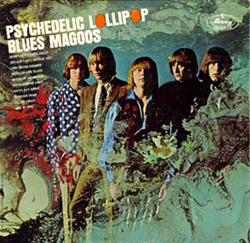 Several great singles will follow, but the group’s maturity should be searched in the splendid Gulf Coast Bound.

Many critics (whose function, believe it or not, is mostly to criticize) say that when this album saw the light, the Blues Magoos were already finished… Dead meat… Gone.

Well, in a way it’s true, because nothing else worth mentioning will ever follow, but Gulf Coast Bound is not the last shake of a dying animal, it still rises head and shoulders above the average and remains a noticeable example of psychedelic rock of a whole period.

On the other Coast (the West one), groups like Traffic, Grateful Dead and such, were hot items and celebrated all over the place. When Gulf Coast Bound came out, almost no one knew anymore who the Blues Magoos were.

And that was really a pity, because they were still fresh and should have deserved a larger audience, a better musical memory and a leaner judgment.

On Gulf Coast Bound we see a slightly different formation than the original one – is this perhaps the reason why the typical Magoos sound was smoothed up a bit? – with Emil Thielhelm (vocals, guitars), Eric Katz (guitar, keyboards), Ritchie Dickon (drums, percussions), John Leillo (vibes) and Roger Eaton (bass). 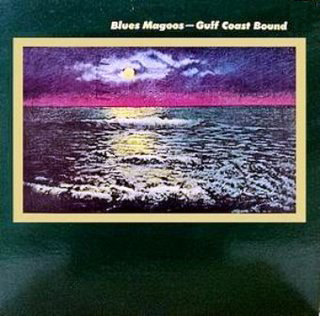 The R&B is here more obvious than ever, but with a very personal interpretation.

Blues and jazz are interlaced very carefully with a rock that perhaps lacks the “scratchiness” of the first period, but is still vital and very much enjoyable.

We miss (thank all gods and minor deities) the usual wink to India and the Far East which characterized many formations of that period.

Most bands using that ingredient (for which I would use the more appropriate definition of ‘expedient’) had actually nothing more to say and tried to stay – economically – afloat by announcing a “spiritual conversion” – sincere or not – and launching themselves into abominable remakes of so-called “original” raga’s and the like (horresco cogitans).

Musical and cultural “contamination” is one thing, pedestrian use of other people’s culture and traditions for personal gain is something completely different.

The music of Gulf Coast Bound still makes you wish you could jump in a ’72 Mustang convertible (my favorite color: indigo blue) and drive along the coast of sunny California with your best friend and a girl or two (my favorite color: blonde, brunette, redhead) on the back seat.

…Drive on, until you meet the sunset.