orrid and plump, Don van Vliet, aka Captain Beefheart, is one of the greatest icons of the musical counterculture made in the US of A.

He and his schoolmate Uncle Frankie (the Venerable Frank Zappa) compete for the crown of the most freaked out freak of the period. In my humble opinion, Cpt. Beefheart wins by ample margin. 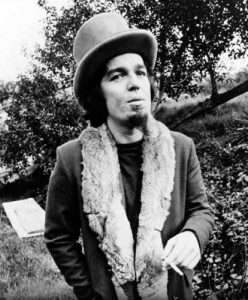 His first album, Safe as milk (1967), with  Alex St.Clair Snouffer (guitar, backing vocals, bass, percussion), Ry Cooder (guitar, bass, slide guitar, percussions), Jerry Handley (bass, backing vocals) and
John French (drums, backing vocals, percussion)  is Delta Blues with all strings pulled so hard that they cut straight into the flesh. While it fails to reach commercial success (as if Don & Co. were looking for that…), it was and still is a milestone in the annals of modern music, the announcer of the boisterous wind of change that Zappa and Beefheart will bring into rock music. It suffices listening to the opening track  Sure ‘Nuff ‘n Yes I Do to understand that the Delta Blues is only an excuse to pull anyone’s (musical) life inside out. 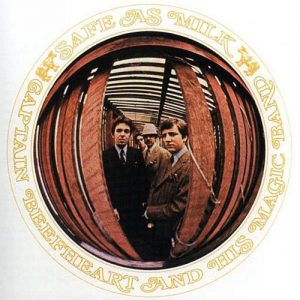 Strictly Personal will follow in 1968. This time, only Don and Alex will remain from the previous album, accompanied by Jeff Cotton (later re-baptized Antennae Jimmy Semens) on guitars,  Jerry Handley on bass and John French (who will later be known as Drumbo) on drums. The critics were disappointed that “such a promising white blues” album could be so spoiled by “all that noisy, freakout shit”, demonstrating once again the true value of critics (i.e. less then zero, on a scale from zero to 10). 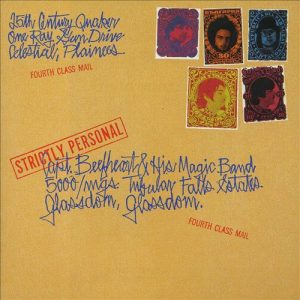 Then what perhaps is destined to be the band’s most important product sees the light in 1969: Trout Mask Replica, where he is accompanied by a bunch of nightmarish figures: Zoot Horn Rollo (aka Bill Harkleroad) on guitars and flute, Mascara Snake (aka Victor Hayden) on bass clarinet, Antennae Jimmy Semens (aka Jeff Cotton) on guitars, Rockette Morton (aka Mark Boston) on bass and Drumbo (aka John French) obviously on drums. The music is violent, true, completely deranged and totally pure. This music cannot be explained, it must be listened to and nothing more, without indulging in empty and insincere hommages to madness, not even as a joke. This is music so visceral that it hits like a punch in the gut and leaves you breathless but, strangely enough, a lot more human than before. 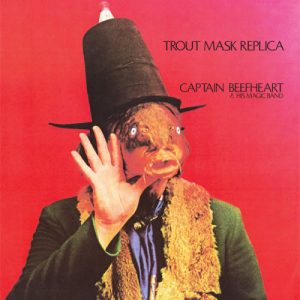 Lick My Decals Off, Baby (1970) sees the almost steady Magic Band formation with Captain Beefheart on vocals, bass clarinet, tenor sax, soprano sax, harmonica,  Zoot Horn Rollo on electric guitar and glass finger guitar, Rockette Morton on bassius-o-pheilius, Drumbo on percussion, broom, with the addition of Ed Marimba (aka Arthur Dyer Tripp III) on marimba, percussion, broom. Don himself said about the record, that the title is already an encouragement to forget about labels, in order to evaluate things according to their merit rather than according to superficial labels (the “decals”). And this is actually what Cpt. Beefheart’s music is all about. The album is again a voyage/experience through derangement, though the melodic structure reminds more and more the symphonic structure of some of Zappa’s later orchestrations. 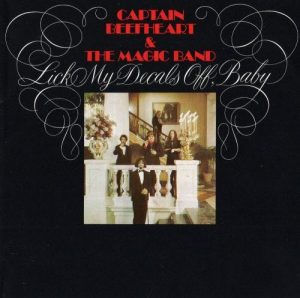 The following Mirror Man (1971) sees a slightly reshuffled formation, with  Captain Beefheart (vocals, harmonica, oboe), Alex St.Clair Snouffer (guitar), Jerry Handley (bass), Drumbo (drums), Antennae Jimmy Semens (guitar) and an additional keyboardist: Mark Marcellino. Lester Bangs (one of the legendary reviewers of the Rolling Stone Magazine), will celebrate Beefheart as “one of the four or five unqualified geniuses to rise from the hothouses of American music in the Sixties”. Listen to the extended versions of Mirror Man and Kandy Korn to understand where that statement comes from. 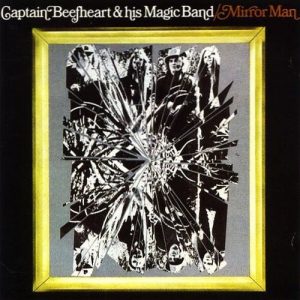 The Spotlight Kid comes out in 1972, with Drumbo on drums and percussion,  Zoot Horn Rollo on guitar and slide guitar, Rockette Morton on bass and guitar, Ed Marimba on drums, percussion, marimba, piano, and harpsichord. The only negative critic that anyone could have upon this album is maybe that it is much more accessible than all the previous ones, even more comprehensible in a way. I’m not sure if that can be a bad thing. Maybe the Captain is trying to make his message easier to bring across or perhaps he is experimenting with the other side of madness (which is not sanity), the one less brazen and violent and devoid of all the jagged edges. 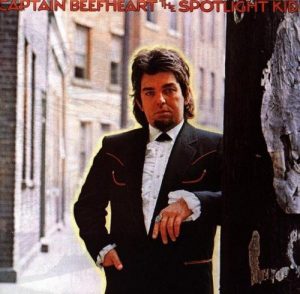 In 1972 another album comes out:  Clear Spot. It features one more slight shuffle in the formation and sees  Captain Beefheart on vocals, harmonica, wings on Singabus, Zoot Horn Rollo on guitar, slide guitar and mandolin, Rockette Morton on guitar and bass, Ed Marimba on drums and percussion and a “loan” from Zappa’s family: Roy Estrada on bass. It is an attempt by van Vliet to make his music once again more accessible and why not, to get some commercial success. Personally, I prefer the sanguine and roaring Beefheart of Trout Mask Replica, but this album may have had the merit to have made his music known to a wider audience. 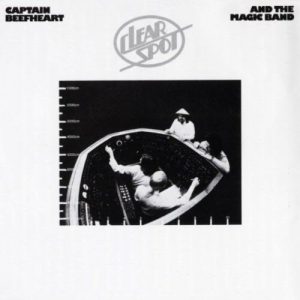 Unconditionally Guaranteed (1974), comes out featuring Captain Beefheart on vocals and harmonica,  Alex St. Clair on guitar, Zoot Horn Rollo on guitar and glass finger guitar, Rockette Morton on bass and Drumbo on drums and percussion. Almost immediately, van Vliet disowned the album and invited the fans to bring it back and ask for a refund (together with their yet to be made Bluejeans & Moonbeams). At the same time, all members of the Magic Band will leave, practically sacking Beefheart. 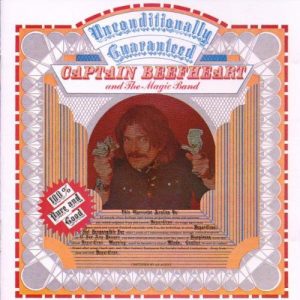 This was also the reason why the next  Bluejeans & Moonbeams (1974) sees a complete new Magic Band, with  Dean Smith on guitar and bottleneck guitar, Micheal Smotherman on keyboards and backing vocals, Ty Grimes on percussion. This Magic Band will play together only on this album, which will be once again disowned by van Vliet, like it happened for the previous one. As a matter of fact, if you haven’t ever heard the Captain Beefheart of Trout Mask Replica, you might be tempted to somehow superficially like this record, like you would do with the nth  new album of a Supertramp copy of a copy of a copy. 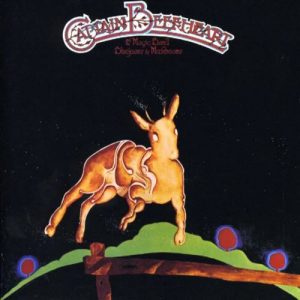 After being unable to record his next Bat Chain Puller because of legal squabbles among Frank Zappa, Herb Cohen, Virgin Records and DiscReet Records, van Vliet turned somewhere else and eventually recorded some of the original tracks plus a couple new ones under the auspices of Warner Bros. The new work came out under the name of Shiny Beast (Bat Chain Puller)  in 1978. For this album, again a complete new Magic Band is recruited: Bruce Lambourne Fowler (trombone, air bass), Jeff Moris Tepper (slide guitar, guitar, spell guitar), Eric Drew Feldman (synthesizer, Rhodes piano, grand piano, bass), Robert Arthur Williams (drums, percussion), Richard Redus (slide guitar, bottleneck guitar, guitar, accordion, fretless bass). Only exception will be the guest appearance of good old Ed Marimba (marimba, additional percussion). The album brings back some atmospheres reminiscent of Safe as Milk and marks the return of Beefheart to his original ways, gaining the appreciation of the general public and critics alike. 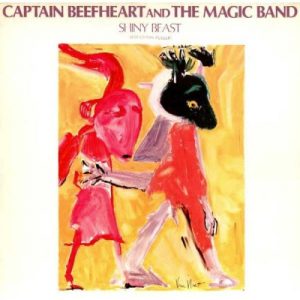 The following Doc at the Radar Station  comes out in 1980. Once again Don van Vliet puts a different Magic Band together, this time with old and new members: Drumbo (slide guitar, guitar, marimba, bass, drums), Bruce Lambourne Fowler (trombone), Jeff Moris Tepper (slide guitar, guitar, nerve guitar), Black Jew Kitabu (aka Eric Drew Feldman, on synthesizer, bass, mellotron, grand piano, electric piano), Robert Arthur Williams (drums) with a guest appearance of Gary Lucas on guitar and French horn. The album is actually more a collection of old ideas and musical fragments that never made it to vinyl for some reason or another, including tracks that were supposed to be part of the budged and never recorded Bat Chain Puller. Commendable effort and interesting album, but van Vliet sounds somewhat tired here and there, while the Magic Band is unable to play with the same intensity. Even the scratchiness is something studied and rehearsed instead of violently erupting from the deep. 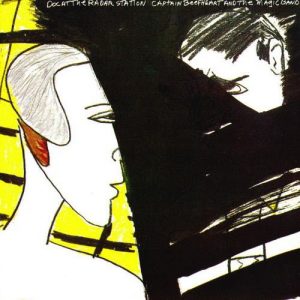 The next  Ice Cream for Crow (1982) will be the last production by Captain Beefheart. It features Jeff Moris Tepper (steel appendage guitar, slide guitar, acoustic guitar),  Midnight Hatsize (aka Richard Snyder on bass guitar, marimba, viola), Gary Lucas (glass-finger guitar, slide guitar, guitar, National steel duolian) and Cliff R. Martinez (drums, shake bouquet, glass washboard, metal drums), with a guest appearance by Eric Drew Feldman (Rhodes piano, synthesized bass). Many people will celebrate it as one of Captain Beefheart’s best albums, though in fact it denotes a certain evolution in a new, more melodical, direction but at the same time we can hear a Captain Beefheart more and more tired and far from his initial standpoints. On the other hand it can be celebrated as the last blast by one of the few truly and totally independent artists of the last 50-odd years. Some others will call it “entertainingly outrageous”. Nevertheless, van Vliet’s irreverent poetry begins to give a sense of reiteration and actually fails to hit the final point. 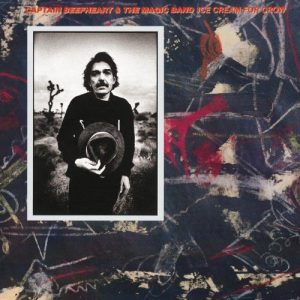 After Ice Cream for Crow, Captain Beefheart will abruptly retire form music to embrace a full time career as painter, which will be as controversial and at the same time successful as his musical one ever was.

He will die in 2010 from complications of multiple sclerosis syndrome, a few weeks before turning 70 years old.

The best epitaph lies in the words left by his friend Tom Waits and his wife Kathleen Brennan: “Wondrous, secret… and profound, he was a diviner of the highest order”.

And he truly was.