his group originated in and around the mythical Canterbury area and will probably remain directly associated with it forever.

Their typical music scales, rhythms and chords, together with their city of origin, will give the name to a very distinctive stream of the British rock: the Canterbury Sound, also appearing as Canterbury Music, Canterbury Rock, or simply Canterbury (depending on the taste of the specific writer).

This band was one of the sprouts of The Wilde Flower and it is interesting to notice that The Wilde Flower’s music – the very first “Canterbury” group – was not even very innovative or creative.

However, many bands will be born from their ranks, and they will all become the highest representatives of the Canterbury Sound and the British rock in general, like Soft Machine and Hatfield & the North.

Directly coming from The Wilde Flower’s split-up in 1967, David Sinclair (keyboard) and Pye Hastings (guitars & vocals) will be the distinctive figures around whom a new musical language will be created and developed.

Their creativity – together with their ability to melt some fresh new forms of rock with the rising “white” British jazz – is more than evident in their composition and improvisation methods.

In their second album, If I could do it all over again, I’d do it all over you, (1970) Caravan explores the alternation of pauses with phrases and syncopations which will be also a prerogative and characteristic of Robert Wyatt’s Matching Mole – also an evident product of the Canterbury Sound – and mix them with a solid melodic base.

The atmospheres are shifting, the colors are like the variegated hues of green under a forest canopy in the sun.

Only in very exceptional cases an album cover is able to convey the same feeling as the music, and “If I could…” shows the perfect example of such a cover. 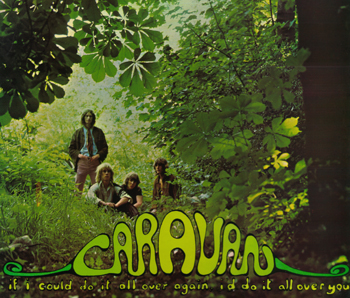 Just lie down on your back, listen to the music and look up through the branches… Let Caravan take you into a marvelous musical adventure through a friendly, enchanted forest.

Caravan is an innovative band, even if its power in that aspect has been for long unacknowledged.

They have never gained a big crowd of listeners soon after the more than beautiful second album.

Almost in silence, they prepared what can be considered not only “their” masterpiece but also an everlasting monument to the glory of the Canterbury Sound: In the Land of Grey and Pink.

This “dream team” is not just a musical family, they are truly a homogeneous group of creative professionals who inspire each other to combine a precise mastering of their instruments with superb improvisation capabilities.

The original master tapes for In the Land of Grey and Pink featured a much longer version of almost all tracks than what will eventually appear on the final production tapes.

Those tracks had eventually to be shortened, mainly because the technique of the time did not allow a vinyl record to have such a length.

On those mythical tapes we can find both the final version of the wondrous Winter Wine together with its equally beautiful instrumental version.

Maybe DECCA/DERAM was not convinced at the time that bringing out In the Land of Grey and Pink as a double LP would make it a marketable product, despite the enthusiasm of their producer, David Hitchcock.

Fortunately – many years later – DECCA amended the mistake and published the CD version of In the Land of Grey and Pink, featuring five bonus tracks, among which the instrumental Winter Wine that at the time bore the name of “It’s likely to have a name next week” (!) and the first draft version of Golf Girl – which at that time was called “Group Girl” – with different lyrics.

In the Land of Grey and Pink is a magical place, where giants walk together with the “Little People”, where legends are born, where musicians combine technical talent with musical freshness, a Land where everything is possible and everything can happen.

Another precious musical jewel for those who are willing to enter the magical world of the Canterbury Sound.

Logic is a systematic method of coming to the wrong conclusion with confidence.