ountry Joe & The Fish is one of those mythical formations of the American counter-culture, the flag-bearer of the protesting generation on the West Coast and at the same time excellent interpreters of the country and folk musical traditions.

Country Joe McDonald (born Joseph Allen McDonald) begun his career quite young and once he met  Barry “The Fish” Melton, who shared his love for the folk traditions and Woody Guthrie’s music, Country Joe & The Fish was born.

They both were politically involved in all kind of movements and progressive-oriented initiatives, like the openly leftist art magazine Et Tu Brute (later to become the Rag Baby magazine), and the Free Speech Movement that was, among other things, organizing the progressive minds at the Berkley University to demonstrate against the war in Vietnam. 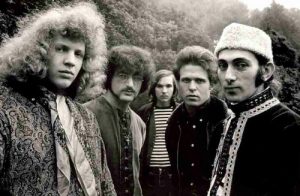 Country Joe & the Fish will also be in the very center of the San Francisco acid renaissance and will be one of the loudest voices at Woodstock. Their live concerts will be given from the back of a van where iron bars had been set up to prevent bludgeoning policemen to get in and stop with violence their fiery songs against the establishment and the Amerikan Way of Life.

Very soon the duo McDonald & Melton will expand, once several jugband musicians from the protest scene joined them. At this point, Country Joe & the Fish will evolve into something more than two guys playing guitars and singing. Their music will also evolve into something more complex, though the basic ideals will remain those of the radical and dissident scene of the West Coast.

All this, combined with the inspiration provided by Bob Dylan with his Highway 61 revisited and the band’s delving into the LSD trips, made them move into more psychedelic atmospheres. 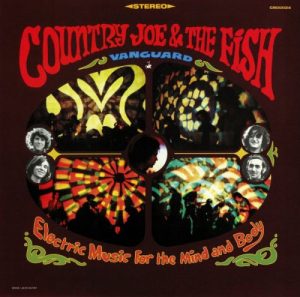 In 1966, the band was engaged by Vanguard and started to work at their first studio album. The label was at the time representing mainly folk artists but wanted to move into the increasingly popular field of psychedelic rock, and Country Joe and the Fish seemed to be the perfect bridge to start crossing over.

It was then that the Summer of Love started to take shape and its prelude, the Human Be-In, saw the band play along the most influential names of the period, like Jefferson Airplane, Quicksilver Messenger Service and Big Brother and the Holding Company. 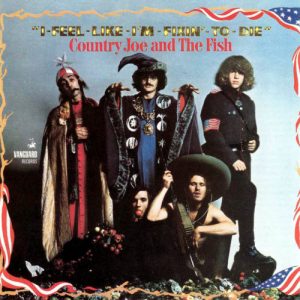 The album marks a point in history as one of the first albums featuring psychedelic rock. In retrospective, All Music magazine’s Bruce Eder will say that this album was one of the most important and enduring documents of the psychedelic era.

Complex and multi-faceted, the album was permeated with acid poetry, free love, folk roots, raga and more and that made it stand above the average production of the period.

Their second  I-Feel-Like-I’m-Fixin’-to-Die (1967) did not immediately become as popular as their previous one, though it is more structured around the psychedelic themes and with a bigger punch supporting the growing anti-Vietnam war sentiment of the time. 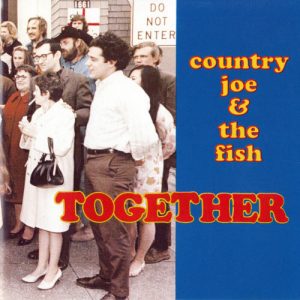 It’s in this album that the “Fish Cheer” makes its appearance. This cheer will also be largely used during their many protest concerts against the Vietnam war. They will also introduce (during a concert on the East Coast) the Fish Cheer in a modified f-word version. Despite the fact that this will grant them a ban by the  executives of the Ed Sullivan Show, it will be influential not only in the course of the protest movement history, but also as a social and political statement in the battle for the freedom of speech.

As a result, their third album,  Together (1968), will be received by a much larger and enthusiastic audience, probably for the very reason of the imposed ban. The young America was seriously starting to rebel. 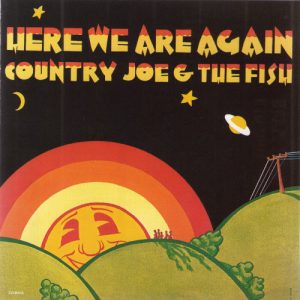 Soon after Together was released, Barthol left the band, mainly due to disagreements about their political involvement in many of the ongoing manifestations.

The use of strings and brass in some of the tracks will in a way alienate the die-hard psychedelic fans, but the album was rather well received perhaps because it sounded a little less acid than the previous ones. 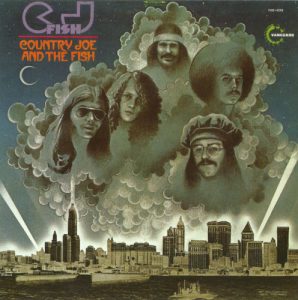 Then Woodstock took place and Country Joe and the Fish were there (though in a slightly revised formation) and were protagonist of one of the most memorable moments of the festival, with McDonald’s improvised solo performance with the “Fuck Cheer” responded by thousands of spectators, singing along with McDonald, propelling the cheer and its creator into the absolute Olympus of the protest generation becoming, from the moment the movie came out, integral part of the mainstream culture in the US for the years to come.

At this point, Country Joe McDonald started his long, valid and fruitful solo career. Not tired, but more quiet, he will go back to his first love, the music of Woody Guthrie, and will make beautiful albums in the wake of that great composer and American Folk music icon. 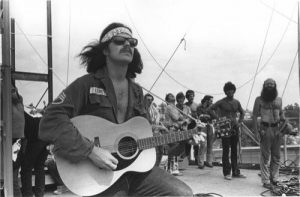 The band will try to cash in on the popularity gained with Woodstock and will produce one more album, CJ Fish, in 1970, but neither the public or the critics will be much impressed and Country Joe and the Fish will quietly  disband.

Country Joe and The Fish will remain the heroes of the protest generation forever.