avid Crosy is much greater than the sum of his work, or his scrapes with Justice for alcohol and drugs abuse, or his marriages, his sailboat or the sparingly released albums.

He is not part of the revolutionary West Coast, but represents the most secluded and poetic presence within the rebellious West Coast of the 60’s and at the same time he is totally separated from it and light years ahead of all the tumult. Instead of moving through the battles for social and racial equality, free love and rage against the establishment, he chose the path of personal enlightenment, poetry and solitude. 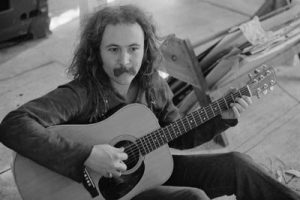 He can look back at what has happened and sing it with love, tenderness and understanding. Compassionately.

And that is maybe the reason why he chose (or perhaps had to) to live on the ocean, alone on his sailboat under the warm Californian sun. And it’s on his boat that he composes and records his music, later to be sparingly sent to his record label for publication.

He is a gentle human being with passions and disappointments, loves and griefs, all of which will find at some point or another their way into his music and lyrics, with a gentleness that doesn’t cease to amaze.

His debut and so far most representative album is If I could only remember my name, released in 1971 after years of writing and sailing on the Pacific. 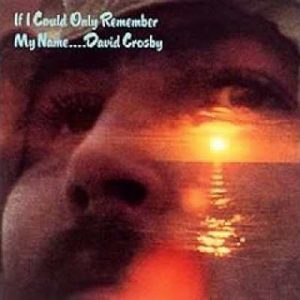 In this album we can find the quintessence of David’s way to look at life, where the apparent detachment is not the result of some extraneous poetic extrapolation; his subdued tones and gentle melodies tell volumes about this gentle mustached sailor, his approach to the past, his openness towards the future.

This wonderful poet has succeeded in a miraculous transformation. From a suffering man or a man who has suffered, he manages to transform these feelings through the artistic process into something higher, complete and all encompassing that becomes for those who look, listen or read his music, the reflection of a pure sense of joy and serenity that both the man and the artist were searching.

Something like this is very rare in music-land and only a few people will be ever able to convey this transformation from hardship into joy, through the use of poetry in music. 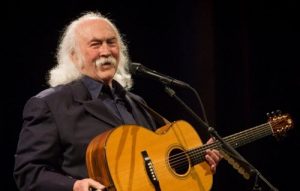 All his other products: Oh yes I can (1989), Thousand roads (1993), Croz (2014), Lighthouse (2016) and Sky trails (2017) will be only a new endorsement of this wonderful poet and sailor’s accomplishments, but will not add anything to the essence more than what was already captured and encapsulated in the wonderful If I could only remember my name.

David Crosby’s poetry is destined to float forever on mankind’s oceans of solitude, mending all griefs and offering hope to those who are willing to listen and open their hearts to life.

Technology… is a queer thing. It brings you great gifts with one hand, and it stabs you in the back with the other.