nything that can be said about the American street protest, starting from the end of the 60’s up to our own days, can be summarized in the work, music and propaganda of David Peel and the Lower East Side.

This wonderfully crazy protester brings an eclectic mix of urban guerrilla, raw fun and counterculture into the streets of New York. 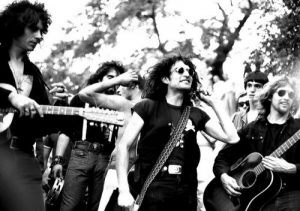 Their best performances have been and still are in the street, where they sing raw rock ballads and limericks about tearing down the establishment, the use of marijuana, bad cops and corrupted politicians. They spare nothing and no-one, not even the Pope.

The band’s first Have a marijuana (1968) is a collection of songs recorded live into the streets, where the band is at its best. Humor and rage go side by side, all spiced up by the most raw and immediate sound you can imagine, all of it carried around Manhattan anywhere people (mostly acid freaks and scandalized bystanders) will stop and listen to them. 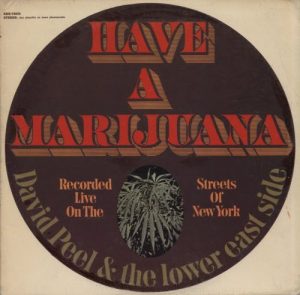 Quite often, their “street performances” will be interrupted by a less accommodating police officer, who will be welcomed by the unmissable choruses: “Here comes a cop […] All dressed in blue […] He’s got a gun […] You’d better run, for your life!” and the war cry: “Up against the wall, motherfuckers!”

It’s actually a miracle that they can bring the second The American revolution out in 1970 and through a big label like Elektra (Warner Music Group)! 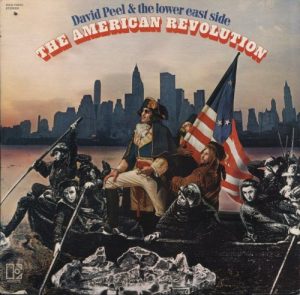 More protest and more satire, to begin with the cover, featuring the famous painting George Washington Crossing the Delaware (by the German-American artist Emanuel Gottlieb Leutze), this time with David Peel as Washignton and the Lower East Side posing as the flag bearer in Davy Crockett hat and Lieutenant James Monroe (future President of the United States) just behind the flag.

Inside, the usual explosive mix of protest, marijuana legalization songs and anti-establishment texts.

Soon after, the illustre John Lennon will see the band playing somewhere in the Greenwich Village and will become friend and their supporter, producing their next album The Pope smokes dope (1972),  which was immediately banned in quite a few Countries around the world (probably the Catholic ones). 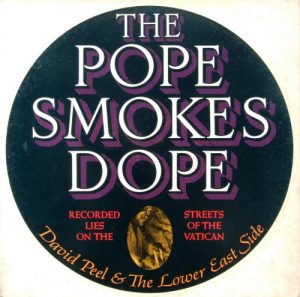 David Peel is witty and at the same time naive in his desire to change the world by singing out there in the streets, but his voice, though not gentle, is pure and goes straight to the heart of those who are willing to listen and are convinced that change, any change, begins by being your own change.

David Peel and the Lower East Side (with many different members during the years) will continue their almost frantic battle against the establishment until our days (2008 and further).