hy should we discuss Edgar Froese in a different context, outside of Tangerine Dream?

Froese was a rather successful spin-off of Tangerine Dream and to be completely honest, a rather fast declining one as well, just like it happened to the mother ship.

Nevertheless, he composed two quite interesting and not undeserving initial albums. Everything coming after those two, will be just as decayed as all the Tangerine Dream production after Rubycon (1975). As a matter of fact also Froese will not produce great records after the same year.

Coincidence? Who knows. Probably not.

The first Aqua (1974) can be linked more directly to the German dodecaphonic traditions and is articulated into four tracks, which was not immediately what we would expect from a Tangerine Dream’s member, who got us used to their long electronic suites developing around central harmonic and rhythmic axes. 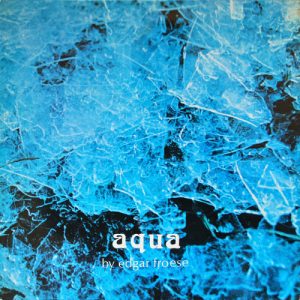 The record is more varied, though the electronic themes are easily connected to each other at some point or the other.

Froese has the merit to have experimented during the recording of the side B by using the so called ‘artificial head system’ developed by Gunther Brunschen, which was basically a set of microphones in the ear canals of a dummy head. This produced a “surround sound” effect when played back through headphones, bringing into the music studio something that had been quite sparsely used only in the movie field, as early as the 1940’s.

His second Epsilon in Malaysian pale (1975) goes back to the Tangerine Dream tradition of one long suite on each side.

Apparently brooded over after a Tour with Tangerine Dream through Australia, the album is a good showcase for the intense and sensible use of the mellotron, an instrument that had been sparingly used so far and mostly by bands moving into totally different realms, like Genesis and King Crimson. 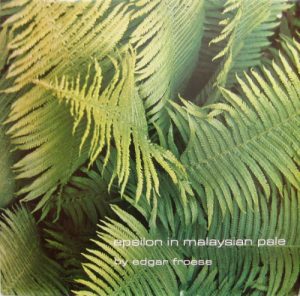 The two suites could have been a prelude to a more defined course towards what would later become known as “Ambient” music that will be so greatly developed, expanded and refined by the excellent and venerable Brian Eno, Jon Hassell and many others.

Unfortunately, Froese’s production will more and more move towards the easier use of pre-defined electronic themes and atmospheres, losing much of the freshness and creativity that could have been used to further explore the ethnic and ambient components already present in his first works.

Two more studio albums will follow and many re-mixes, re-recordings, re-mastered and whatnot will put Froese on the same declining trajectory of the mother ship Tangerine Dream, deep into oblivion.