heir name is obviously borrowed from the eclectic mystic horror writer of the 20’s.

The writer, who died a young drugged and alcoholic death, wrote about strange places, with dark, oppressive and scary atmospheres.

The band has not chosen that name just by accident or fortunate coincidence.

Their music is contorted, with strange vocal polyphonies, full of veiled sadness and ghostly esoteric fumes and mysticism.

Music like this will not be heard very often.

Their imaginative songwriting and the strange musical atmospheres will not be easily emulated or followed by later bands. As a matter of fact, not even their contemporaries will.

They remain a kind of isolated phenomenon. 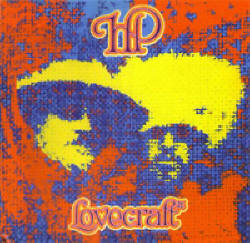 Though quite innovative – if not revolutionary – their music will not break out of the “freak-circuit”.

They will be better known among the psychedelic fans during the late 60’s – but not later – and will eventually silently disappear from the scene.

They formed in 1967 in Chicago by George Edwards (vocals) and Dave Michaels, also on vocals. The latter had a formal classical training and an incredible four-octave vocal range.

The first, homonymous H.P. Lovecraft, featured own compositions (which were actually the strongest part of the whole LP) and other tracks by Randy Newman and Fred Neil.

Soon after, they moved to California, perhaps in search of more stimulating atmospheres or more musical turmoil, like the West-Coast of the late 60’s and early 70’s and it’s there that they will make their second, and last, album – also this one without a distinctive title but just H.P. Lovecraft.

Not at the same heights of mystical transfiguration and darkness as the first one, it will not renew the interest of the local freaks and H.P. Lovecraft will disappear from the scene.

In the later 70’s another band will circulate with the name Lovecraft, but they will have nothing to do with the original formation, not musically, anyways.

H.P. Lovecraft’s music deserves to be remembered and appreciated, was it not only for their intense and quirky sound.