hey can be considered as the most sophisticated and musically evolved, though still very traditional, Canterbury band.

Its members come directly from the most important bands that have founded the Canterbury sound and held its name high, like Caravan, Egg, Delivery, Henry Cow, Gong and Soft Machine.

These names are legends in their own right and they all melted together again to play one of the most astounding music that was ever made by a Canterbury band.

The complexity of their sound is almost endless, with elements coming directly from the avant-garde of British jazz, while others can be even compared to some streams of international minimal music. 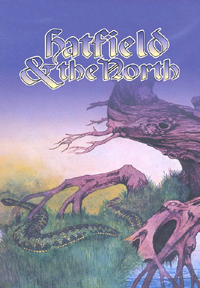 Just in the middle of this, we can enjoy the familiar and solid harmonic and rhythmic rock base as we are accustomed to hear from all Canterbury bands.

The members of Hatfield & the North are among the most gifted musicians of a whole musical period, both technically as well as creatively.

Then we have Phil Miller on guitars. The way this guy can play a fuzztone solo and at the same time can turn a melody completely inside out while sounding like he’s still playing a solo and eventually managing to keep every note perfectly recognizable, is just amazing. 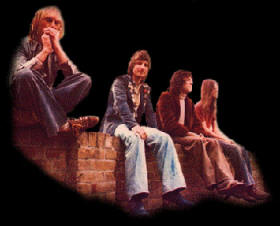 Dave Stewart (keyboards) comes directly from the most purist white jazz tradition and at the same time he is able to master all kind of other keyboards, like organs, mellotrons and synthesizers with a precision, virtuosity and creativity that are more than extraordinary.

Last but not least, Richard Sinclair (bass), one of the few – if not the only one – playing bass in a most creative way while still being able to sing complex harmonics on a completely different scale and rhythm of what he’s playing.

This basic quartet is completed – and complemented – by several artists all coming from the Canterbury tradition.

On their first Hatfield & the North, dated 1973, Robert Wyatt will sing the splendid Calyx, which will be remembered as one of the most intense and qualitative pieces of his career.

At this point we must absolutely mention the female choruses offered by the delicious Northettes – Barbara Gaskin, Amanda Parsons and Ann Rosenthal – hitting all those notes that we could not even imagine were there.

On this album, the illustrious participation of Geoff Leigh, from the Canterbury avant-garde formation Henry Cow, will be recognizable in the most interesting brass measures.

Hatfield & the North is a monumental masterpiece containing 17 tracks, most of which are pretty short songs running into each other, creating a very fluid thematic ambiance.

Musically, it can be seen as a continuation of Caravan but with a higher degree of musicianship, featuring more impeccably arranged segments and a melodic language that is nowhere else to be found – although in some Caravan songs we can already find the first hints.

Most interesting on this album are the beautiful quiet songs by Richard Sinclair and his patented soulful delivery, while Pip Pyle´s miniature epics include strange meters and all sorts of experimentations which end up involving all musicians.

The next and – most unfortunately – last product will see the light in 1975, under the name of The Rotter’s Club.

Some very famous Canterbury musicians will also in this occasion add value to the whole: the splendid as usual Northettes, Jimmy Hastings – from Caravan – on brass, together with Mont Campbell (French horn) and the two Henry Cow members Lindsay Cooper (oboe) and Tim Hodgkinson (clarinet). 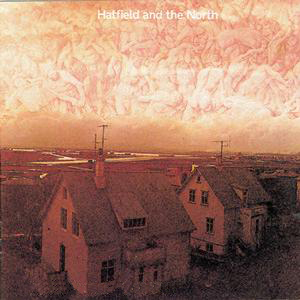 On The Rotter’s Club we can listen to what has now become the Canterbury anthem: Mumps!

This track develops in four parts during 21 minutes, displaying the pure genius of the formation.

I must have heard it at least 70 times and I still come across things I had apparently not registered before.

… That cannot be a bad thing.

Despite the geniality of these two products, the public consensus does not grant the commercial success.

Hatfield & the North will not stand this pressure and will soon after split up.

Luckily for us, some of the original members will form the National Health, bringing the Canterbury music back to new immaculate heights and can be considered the most refined and creative form and evolution of the Canterbury sound.

But that is another story…