he music of Hawkwind is born informal, full of electronic echoes and effects.

Its whole concept originated from the first happenings of the trio Bob Calvert, Dave Brock and Nik Turner in 1969.

Bob Calvert will become its poet, semi-mad, involved in all kind of hallucinogens and sometimes totally unintelligible for those not as “high” as he is.

To testify this search of a music-trip, the back cover of their first homonymous album textually reports:

“This is the beginning.
By now we will be past this album. We started out trying to freak people (trippers). Now we are trying to levitate their minds, in a nice way, without acid, with ultimately a complete audio-visual thing, using a complex of electronics, lights and environmental experiences”.

And in that they should be reckoned to have succeeded, at least in several occasions.

Unfortunately, Nik Turner will not make the switch from real acids to their audio-visual counterpoints and will end up at most of their live concerts too “high” to be in state of a decent performance.

Pity, because he is in a way Hawkwind’s motor and fuel.

Tracks as You shouldn’t do that, or Masters of the Universe are like monuments to some obscure virginal cult, rich in their arrangements and still accurately calibrated in the electronic effects. 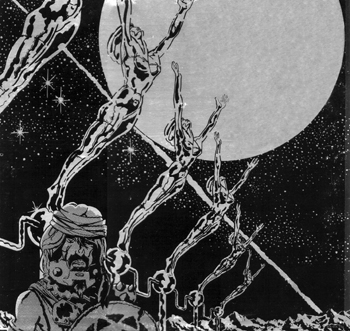 Those electronic effects will be Hawkwind’s originality and condemn at the same time.

When, in later years, the band will still obstinately go on, despite the departure of almost all its original members, those effects will be the only thing that will hold together a very poor musical product, still trying – fooling only those who never heard Hawkwind’s first albums – to offer a trip without acid and ending up into a horrible repetition of phrases lengthened up to the limits of decency and without any musical value.

When we hear that, we may praise ourselves lucky to have experienced Hawkwind’s old recordings.

In those “old” albums, the novels of one of Bob Calvert’s best friends, fantasy-writer Michael Moorcock, seem to become alive, especially in the totally dedicated to fantasy-epos Doremi Fasol Latido.

The music tells tales of space and battles, where human and half-human warriors – male and female alike – live a never-ending epos of intrigues, honor, love and war through the corridors of time and space.

Noteworthy is the splendid black-and-silver cover with a impressive inner sleeve which seem to come directly out of one of Michael Moorcock’s pages.

After the sometimes genial, sometimes quite boring Space Ritual, an exasperated Bob Calvert will leave Hawkwind for good and even Simon House – the violin genius of High Tide, who joined Hawkwind for a brief interlude – will not be able to pump new life into the group.

One last witty product, Warrior on the Edge of Time will display some steely hard rock and for some moments it seems that Hawkwind has found a renewed life force, but the more alert listeners will notice that here and there the chords and phrases are sounding a bit too memorized and not coming from the heart, while the electronic effects will almost disfigure Simon House’s virtuoso intensity.

He too, will eventually leave, and that will be Hawkwind’s death sentence.

Many albums will follow (too many, actually) to testify how geniality can be totally smothered by obstinacy.

A beautiful dream that did not come true.