ome of the most shining jewels on the crown of Canterbury come from this group.

They could be defined as the harmonic or melodic counterpart of Man, but this definition is not totally fair, may seem restrictive and could be misinterpreted.

Their music is rock-solid and totally coherent. 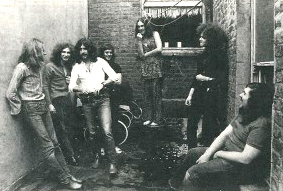 They may be seen as a musical “bridge” between Man and Caravan and yet, they have a complete own musical identity, making them as pristine and independent as the other flag-bearers of the Canterbury scene.

They have introduced some new harmonic forms into the Canterbury and Reiterative rock. However, that fact did not bring them to the same celebrity that was given to the other (lesser, in my opinion) bands of the same stream.

It’s a pity, but not entirely caused by the audience or the market.

Help Yourself has always preferred to stay in the London underground rock-scene and that didn’t make them as known as their other contemporaries.

While very well known at the time, the movement shifted soon after to other musical forms. Help Yourself will stay there and will keep on playing for the more and more shrinking group of “aficionados”. 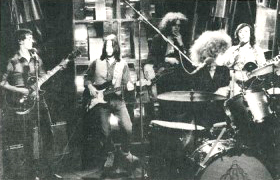 Perhaps not a very smart marketing move, but for sure a coherent and true one, without compromises solely dictated by the selling figures.

Their music moves among long, intense rock suites – like those of Pink Floyd, Man, or Daevid Allen’s Gong – and shorter, sweet ballads like the ones of Robert Wyatt and Soft Machine at their very first steps.

Despite the comparison, their music is totally original and their “sound” can be recognized immediately by anyone who has ever heard them at least once.

Their whole official production is summarized by 4 albums: Help Yourself, A strange affair, Beware the shadows and The return of Ken Whaley.

Perhaps with the exception of the last one, they all echo the same vibrating intensity of thoughts and freshness of sound. 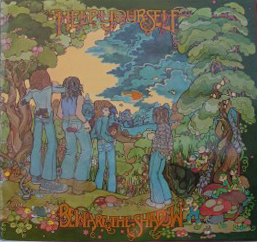 They can be found also on the extraordinary Christmas at the Patti, playing host or jamming with the other guest bands.

In this occasion – once again – their musical importance becomes evident, while their creativity unfolds and merges with that of the other musicians.

Some of the most beautiful and intense tracks of Canterbury and Reiterative music should be ascribed to this band.

Music like in Strange affair, Brown lady, Movie star, Deanna call and Scotty, Heaven Row, Alabama lady, She’s my girl, or Molly bake bean, are true treasures of a musical culture that was perhaps doomed to disappear, but which formed the solid base upon which a whole future musical period has been built. 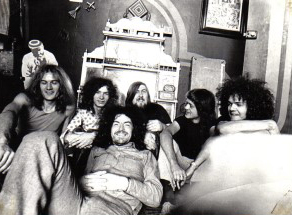 Some wonderful genius has in recently years, re-mastered and re-published their music on CD (kudos to their courage).

It’s a due tribute to a band whose vinyl records are by now worn-out and dusty-grey (at least, mine are…).

Don’t forget to knock at Help Yourself’s door while exploring the intriguing streets of Canterbury… You’ll be generously rewarded.