he mysteries of the sea.
Ladies and gentlemen: this is High Tide.

High Tide is born with a strange love for the ocean, its depths and legends.

Their first product – Sea Shanties – was a gigantic wave of heavy sounds with subtle and sudden color changes and was a prelude to a great sequel. 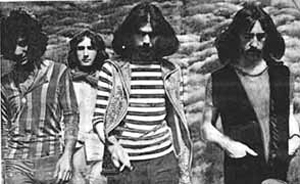 In 1969, Black Widow and Black Sabbath arrived on the scene… the Dark Sound was born and it would be like a death sentence for High Tide.

The group’s sound was much too elaborate, fresh and introvert to be constrained into the narrow and tedious meanders of the Dark Sound.

Unfortunately, too many critics will glue that very same label on High Tide and this will relegate this wonderfully creative rock formation into a small musical corner that will soon degenerate and become polluted by so many bands unworthy of even being mentioned here.

This is a clear example of what careless – to say the least – critics can do.

Always go and listen with your own ears, keeping your mind and heart wide open.

Do not judge before you really have heard all what is being said and played.

…This is the only way.

All the rest is just pre-digested ideas and thoughts that are not part of your own judgment and perception.

Their next, eponymous album High Tide (1970) was a lucid, measured example of a music that is difficult to categorize (and as such doesn’t deserve the blemish of any label forced onto it).

Blankman Cries Again is like taking a ritual dive into a stormy sea just before going to battle.

If you are familiar with Michael Moorcock’s books, or with Hawkwind’s music, then you know exactly what I’m talking about.

The same sense of rituality and solemnity, intertwined with the expectation of battle, or perhaps a dreadful death, or maybe a great heroic epos, can be almost physically sensed during this whole glorious track.

The Joke is a splendid piece of interlaced soloist lines.

The quartet builds up an incredible wall of sound in which all the single measures and instruments are crystal clear and separated, but still compact and homogeneous.

These interweaving solo lines eventually flow into a surprisingly tender violin finale, which I personally rate as the most beautiful 2 minutes of an entire musical era (…hearing is believing).

Saneonymous, where the piano – a new ingredient in the High Tide delicacies – is subterranean. Obscure but enlightened.

Tony Hill and Simon House play – in the double meaning of the word – with each other’s phrases and create a splendid, shining carpet of music.

The geniality of this album – and of their music in general – did not seem to be enough to guarantee their musical survival at the time, also because of the dreadful “labeling” of the critics.

However, their albums were, just a couple of years later, sought-after items.

A piece of history which we, at the time, were too blind to see…. 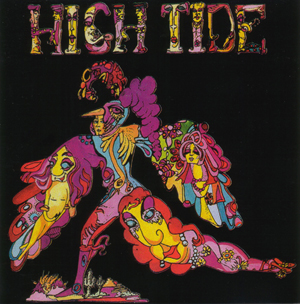 Simon House is the only name that will be quite often heard of.

After his beautiful parenthesis with the Third Ear Band in Macbeth, he will be found taking the paths of outer space after joining the Hawkwind.

Unfortunately, even his genius will not save Hawkwind from the downward spiral that had set in and he will soon leave that formation becoming, later on, a renowned session man – one of his latest jewels: the participation to the beautiful and delicate Tin Drum album by Japan).

Peter Pavli is occasionally reported, as a good session man, with various artists.

Tony Hill…. There are only rumors about him.

After a solo album – Playing for Time, which I have not listened to, unfortunately, so I must suspend any judgment – it seems he’s planning a return with the High Tide name.

Then again… Maybe not.

At present, they are “just” a beautiful legend and fully deserve to remain so.

Enjoy this record to its maximum (I have the CD and the LP and it may sound sentimental, but in my musical world, High Tide only makes vinyl records…).

It is a true lost treasure of a group whose music is like the ocean: deep, dark, mysterious and always changing.