he American musical panorama is likely to confuse the minds of the most orderly and capable music explorers.

Like most things in the US of A, this scene is huge, contradictory, original, different, banal, genial and most of all, there’s so much of it that you can loose your marbles even before starting with its exploration.

Nevertheless, it’s an interesting place to be and provides a fantastic chance to come across some musical phenomena that simply could not sprout in good ol’ Europe.

This is not the place to start a dissertation about the cultural and geographical reasons of this impossibility. Many, and more qualified, people needed hundreds of pages to come often to very different conclusions on the subject, so I will not even try to emulate.

It’s a Beautiful Day had the undeniable advantage to see the light in the right place (the West-coast) at the right time (the late 60s).

Born around brother and sister LaFlamme (David on the violin and Linda on the keyboards), It’s a Beautiful Day writes some of the nicest pages of the American West-coast music.

Their first album, the homonymous It’s a beautiful day, presents some of the tracks that will inspire a whole musical generation, both in the US and abroad. Episodes like White Bird or Hot Summer Day are in their own right a monument to the “hippie generation”, a word that will be too often used with a negative undertone. 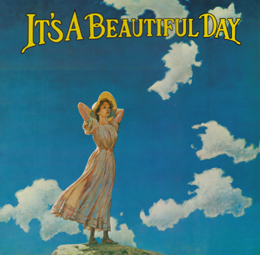 This generation went head-over-heels into the discovery voyage to the true meaning of concepts like independence, equality, humanity, freedom, spirituality and universality.

Most of these concept still belong to an utopia, and they came into existence precisely in one of the World’s most reactionary Countries, or maybe just because of – or thanks – to that.

Another track on the same album, Bombay Calling – which Deep Purple will later on steal for the introductory phrases of Child in Time – unfolds a magical scenery dense of improvisation and sounds that will unite East and West without the banalities of many other bands that will follow “the Indian dream”.

After the first album, Linda LaFlamme will leave but, despite this, It’s a Beautiful Day will go on and will produce some very interesting albums, like Marrying Maiden or the live At Carnagie Hall, offering a music that will still preserve its freshness but failing to escape from the mediocrity of a West-coast band taking the way of rock.

Fortunately for us, their first album is still around, even if it’s by now a pricey collector’s item (which, by the way, I happen to own – in all its vinyl glory).

When we look at the inside cover, with the eyes of today, we probably cannot suppress a smile at the “dated” atmosphere of the photograph, bearing the perhaps naive text: “For those who love…. Time is eternity”.

No matter how corny it may sound today, this is not just a one-in-a-million-Hallmark-postcard-text.

It’s a Beautiful Day’s music is eventually and essentially about love. Love for life, for being together, for being able to make a difference.

And let’s be honest: who wouldn’t fall in love with the girl on the front cover?

As cities grow and technology takes over the world belief and imagination fade away and so do we.