ne more “love it or hate it” kind of band in the vast panorama of the British rock that evolved, at the end of the 60’s, from what Beatles and others had started.

Just to be clear from the start: they will still play long after 2015 in different reincarnations, but the only interesting part of their production is the one put together until the end of the 70’s. After that date, too much has already been heard and too few is worth mentioning. 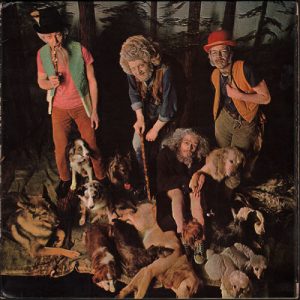 While at the end of the 60’s almost everyone declared “the Beat is dead”, some will move towards the psychedelia, others will launch themselves into more extreme jazz and electronic experimentation, while some will feel the urge to look back at their rural and cultural heritages, the blues and its simplicity and immediateness of expression.

It’s along these streams that Jethro Tull will move the first steps. The year was 1967 and the cradle was Blackpool, Lancs. 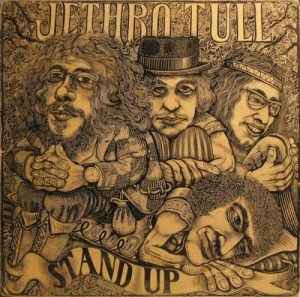 Their first work, This was (1968), is an eclectic collection of tracks where Abrahams’ excellent guitar play, between blues and jazz, comes to the foreground, while already Ian Anderson will start to be noticed for his long, ragged and patched-up coat together with his characteristic flute playing style, which was, if not innovative (Roland Kirk had done that at least 10 years before) at least meritable for having introduced with such success this instrument to the rock stages. 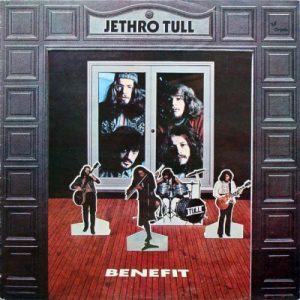 The next Stand up will be published in 1969. From this album onward, Ian Anderson will clearly take over the formation’s leadership (despotic or not), due to Abraham leaving the band because of irreconcilable differences with Anderson about the musical direction. Abrahams will be replaced on the lead guitar by Martin Lancelot Barre.

The album echoes more rock-folk atmospheres, and that was exactly what Anderson had wanted from the beginning. This will be apparently a good move, since the album sky-rocketed to nr. 1 on the UK charts. 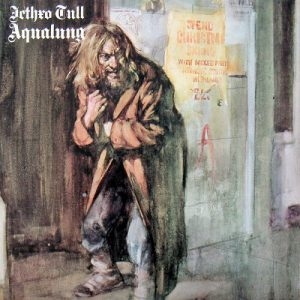 In 1970 Benefit sees the light. Once again, Ian Anderson smelled the right way to go and again we see a certain shift towards the prog-rock with a few and more definite winks to classical music.

Though the album was not exceptionally well recensed, it was rather well welcomed by the audiences and the band started to gather a definite amount of fans both at home and abroad. 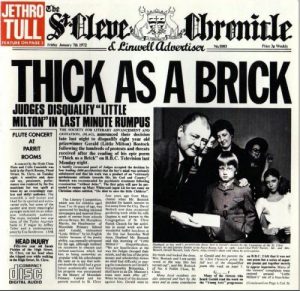 Their next Aqualung (1971) will be in the eyes of many a concept-album exploring the differences between God and Religion. While it will be rejected by many, it is still one of their best sold albums. 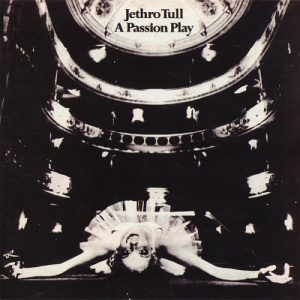 The sometimes irreverent lyrics will become a house-brand of dorts for Jethro Tull. This will be even more largely exploited in the next Thick as a brick (1972), which has been conceived as a kind of irreverent spoof towards the at the time more famous albums by Yes and Emerson, Lake & Palmer. 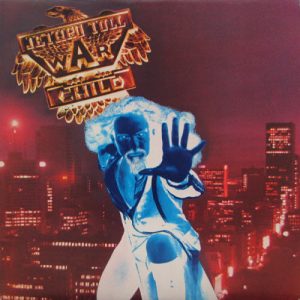 The music has evolved into more complex textures, but the final product does not convince entirely, either as a tongue-in-cheek to those other bands, or as concept-album, as many wanted to see it.

The following album, A passion play (1973) should have been a monument to Jethro Tull’s iconic musicianship, but it will already bear the heavy marks of the decline and incipient end. The dominating minor keys on all tracks make the album difficult to digest, not because it’s too complex… it’s just too boring. 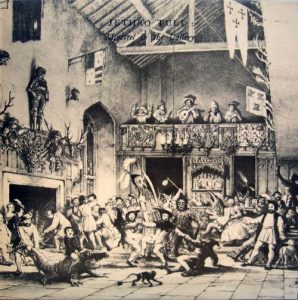 The next War child (1974) should have revived the band’s popularity after the musical debacle of A passion play, but it did not convince. The tracks are a collection of old recording not yet published, or leftovers from previous recording sessions. The album does not impress and leaves no permanent memory. 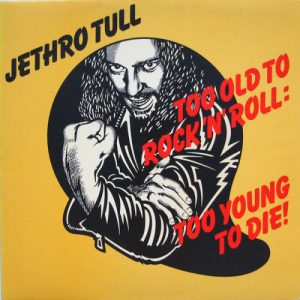 Minstrel in the gallery (1975) will be another attempt to revive the band’s reputation, ransacking once again the British secular music traditions in an attempt to mold them into modern matrices. Once again, there are enough die-hard fans who will buy whatever Anderson & Co. will bring onto the market, but the product is a bit too lightweight to sustain a good and deep scrutiny. 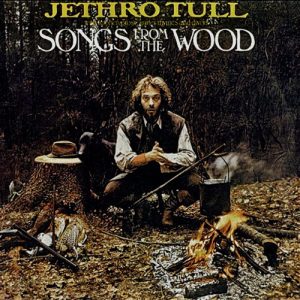 Ian Anderson’s histrionics and hysterics will earn him a broken leg during the band’s tour in 1975 and that will be the most noticeably news about Jethro Tull that we will further hear. 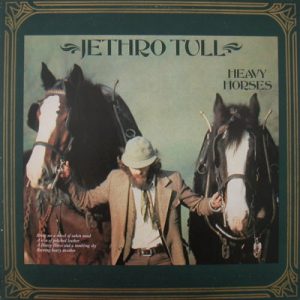 One less important than the other, with repetitions that add nothing new to anything that Jethro Tull has composed or played so far, despite the desperate attempts to win back the folk-rock audience and the use at some point or another of great names of the British Folk like Maddy Prior (Steeleye Span), Dave Mattacks (Fairport Convention) and more.

From this point on, one repetition follows the other, in a neverending déjà-vu of Anderson’s playing the flute while balancing on one leg, his ever ragged and patched long-coat and classical accents all over the place. 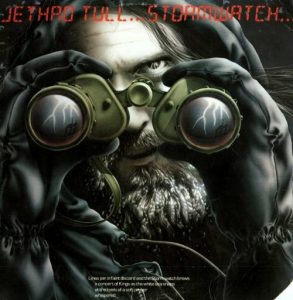 No point in repeating this again and again, just accept Jethro Tull as a rather innovative band who almost immediately succumbed to a forced will to remain popular, creative stagnation which will not be saved by their technical musical proficiency.