s Jonathan playing Rock, Pop, or perhaps he’s already making Retro-punk even before Punk itself was an established fact?

Or is he just making fun of us all?

At the outset of his career, Jonathan Richman was considered a radical trailblazer, diligently exploring minimalist rock, years before the word itself had even been created.

Whatever his unique approach to music in general might have been, he has certainly been of great influence upon many later formations, and so did some of the original members of his accompanying band, The Modern Lovers.

People like Jerry Harrison was later to become a member of Talking Heads, while David Robinson had much part in the Cars sound.

One thing we can be certain of: if we listen to some of Jonathan’s tracks and we think to recognize in them, for example, Talking Heads, then we must think the other way round: in some of tracks by Talking Heads we can still discover something of Jonathan. 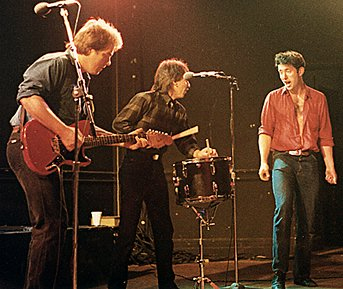 However, during the evolution of his recordings, Jonathan’s predilection for childlike whimsy rhymes and melodies replaced the angst-ridden emotionalism of his first songs, and he challenged his audience by refusing to remain the same character he had been a decade earlier.

The first The Modern Lovers album was patched together by Matthew King Kaufman, Beserkley’s supremo, from a bunch of demo tapes, the majority of which had been produced by John Cale in 1972.

Despite the fragmentary nature of its parts, The Modern Lovers is surprisingly coherent and contains all of Richman’s classic creations: Roadrunner, Pablo Picasso, Girl Friend and She cracked.

These immediate, simple performances give us his adenoidal newcomer’s New England voice that lacks everything technical but nothing emotional.

One of the truly great art-rock albums of all times. 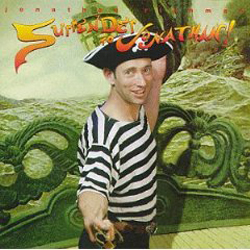 The album Jonathan Richman & the Modern Lovers was recorded five years later with a totally different band, and has little in common with the first LP.

Not realizing the time frame, many people took this as a sign of artistic inconsistency or even a set-back.

The listeners were treated upon such silliness as in Abominable Snowman in the market and Hey there little insect, that many abandoned Jonathan’s fan-crowds.

However, Jonathan’s approach carries over to temper the giddy romps, and it’s a thoroughly charming, low-key album.

Rock’n’Roll takes Jonathan Richman even further away from seriousness.

Mixing traditional folk songs and lullabies with originals, like Ice cream man, or Rockin’ rockin’ leprechaun, the ironically titled album stretched the ability of his adult fans to join in the fun.

Many were left wondering just where Richman was heading.

I think he was just getting to the point of simply having a great fun with making music.

Back in your life was recorded after a long silence.

The songs, which include five unique cover versions, are totally over the top, as fanciful and ridiculous as possible.

There’s nothing remotely connected to the original Modern Lovers’ work.

Comparisons to Groucho Marx’s musical ventures are more adherent to the spirit of this album.

Audibly bursting with love, Jonathan Richman entertains us, in his own ingenuously clumsy way, with little masterpieces like That Summer Feeling, You’re the One for Me and Somebody to Hold Me.

Elsewhere, he defends the innate wisdom of infants in Not Yet Three.

The new Modern Lovers have a strong but understated presence that keeps Jonathan exciting without getting in his way.

Jonathan has continued on this marvelous track ever since, issuing one charming album after the other.

The music is filled with his remarkable wit and intelligence.

Who else could write lyrics to blue-jeans discussing the relative merits of various brands without being mistaken for a commercial?

Later on, accompanied by a second guitarist and a drummer, Richman grabbed his too often neglected saxophone and cut the magical Modern Lovers 88, an all-too-brief set of semi-electric rock tunes that reminds the best composition and presentations of Jonathan Richman & the Modern Lovers.

Between a somewhat Buddy Holly oriented sound of New Kind of Neighborhood, Circle 1 is a maniacal but delightful ode to vegetables. 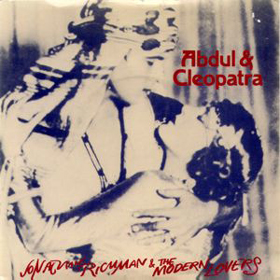 Jonathan converts the essential ingredients of 50’s R&B into airy but exciting dance-rock as only the Modern Lovers can.

Jonathan had already tested his multi-lingual skills on record.

Still, the singer’s all-Spanish album is a happy conceptual surprise: Jonathan, te Vas a Emocionar! includes loosely translated renditions of songs from his previous albums, like A Higher Power (Una Fuerza All) and You Can’t Talk to the Dude (No Te Oye), Just for Fun (No Mas por Fun), The Neighbors (Los Vecinos) and Reno (Reno) as well as a couple of Mexican original numbers.

Juggling with gently but robust romanticism over nylon-string guitar and piano, Richman is no less charming in a foreign tongue, even when he gets up to his old tricks like waxing handsomely sentimental about the Marx Brothers (Harpo en Su Harpa), focusing deeply on a gum wrapper (Papel de Chicle) or recounting a Persian lovers’ fable (Shirin y Farad).

All he says about his language skills is:

“Don’t blame…the people who helped me for the way I ‘stretch’ the language at times. I do the same in English”.

Richman’s debut for Neil Young’s Vapor Records, with the incredible Surrender to Jonathan, involves a full band for the first time in ages and it sounds awfully good. 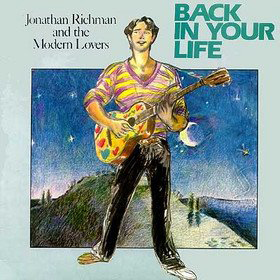 A horn-fueled remake of Egyptian Reggae gets downright funky, and I Was Dancing at the Lesbian Bar also works well in this setting.

As usual, the eleven new songs offer Richman’s unique takes on everything from spousal identity issues (Not Just a ‘Plus One’ on the Guest List Anymore) to fatherhood (My Little Girl’s Got a Full Time Daddy Now).

On the other hand Rock ‘n’ Roll Drummer Straight From the Hospy-Tel marks a return to the good-natured silliness of his later Berserkley albums, and the title track, Surrender, is one of the most touching songs Richman has ever written.

As the album closes with a dream of floating on the ocean, surrender is the only option.

In the movie ‘There’s Something About Mary’, Jonathan takes the role of the film’s singing narrator.

He performs songs commenting on the action, and his fate provides its final punchline. 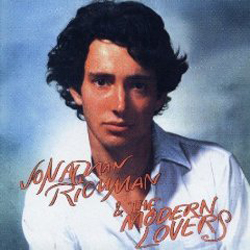 The soundtrack album contains several Richman originals, of which the most notably is the sweet, charming title track, as well as selections by Propellerheads, the Dandy Warhols, the Foundations and others.

Surprisingly, given the movie’s success, the album failed.

The closest Richman has come to universality since then, was the use of Ice Cream Man in a commercial for Kohl’s department stores.

Richman live shows have long been legendary in their ability to inspire group hugs in rooms full of strangers.

In 2003, he released the concert DVD ‘Take Me to the Plaza’. On it, Richman and drummer Tommy Larkin perform a well-chosen selection of tunes from his last few albums.

He stretches way back to include a couple of Modern Lovers classics.

While this can’t compare to the live Jonathan experience, ‘Take Me to the Plaza’ is a dandy substitute.

To err is human, but to really foul things up requires a computer.