The original lineup would have been Steve Hillage (guitar), Dick Heninghem (organ), Nick Greenwood (bass) and Pip Pyle (drums), therefore concentrating quite some present and future Canterbury talent into one place. 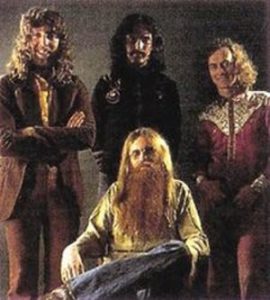 Space shanty will come out in 1972. The record is infused with a mix of Canterbury, Rock, British white jazz, with some classic accents here and there. In its totality, absolutely not a bad product, though not an amazing one altogether.

Musically, everything is already there. Canterbury is the canvas on which Khan paints, though the lyrics take a more prominent place than what we are used to in Canterbury-land. Good, but at the same time there is nothing in there that really gives you the goosebumps.

The title track Space shanty is already a manifesto of all the different styles that will permeate the other tracks, while Hillage’s dexterity and signature glissando is already maturing, ready for what will be his shining partnership with Gong and his future solo career. 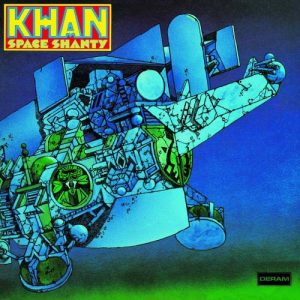 After Space shanty, the band will tour Europe together with Caravan and towards the end of the tour, they will start to write and collect new materials in preparation of their next studio album.

Sadly (or maybe wisely), Decca did not see much in the project and withdrew their support for a next album. Hillage will keep most of the materials already written and will save them until 1975, when his first solo album, Fish rising, will see the light.

Khan remains a very valid experiment where Canterbury tries to evolve into a new form, even if escaping the Canterbury lines and forms was a mistake that Hillage & Co. had not see coming.

Maybe the band was not mature enough, musically speaking, to create a new product from roots that had not been fully explored yet. Maybe they tried to overstep the natural evolution of the Canterbury sound. Nevertheless, kudos to them for trying, as the experiment is enjoyable and remains one of the better Canterbury records around.

Before you become too entranced with gorgeous gadgets and mesmerizing video displays, let me remind you that information is not knowledge, knowledge is not wisdom, and wisdom is not foresight. Each grows out of the other, and we need them all.