t’s dangerously easy to be enthusiastic about the majority of the rock music from and by the US of A.

I (and many others with me) are guilty of such a blunder in quite a few occasions, though eventually we all (I hope) became conscious of the limitations of this huge and not always honest musical stage on the other side of the Atlantic. 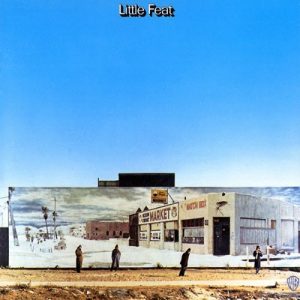 However, Little Feat reaches us with a sincerity and freshness that makes overlook their lack of revolutionary impact on the rock genre.

God and all minor deities bless Lowell George and his band mates for their “rock for the body”; music with no other pretense than to make you jump up and move, dance and have fun. This is something that many contemporary so-called rock-idols are sadly and totally lacking. 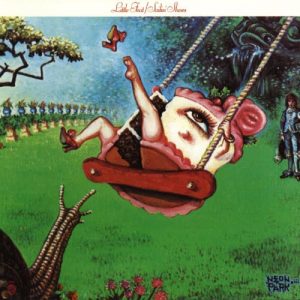 Little Feat was born in 1969 in the Berkeley area, when guitarist Lowell George had just become a former member of Frank Zappa’s Mothers of Invention. He met Bill Payne (keyboards) during his audition to join the Mothers and asked him about forming their own band. One more of the Mothers’, bass player Roy Estrada joined them and when drummer Richie Hayward joined too, the team was complete.

Their first eponymous Little Feat was released in 1971. Fresh ans spontaneous, it was just a prelude to what will be the future Little Feat sound. 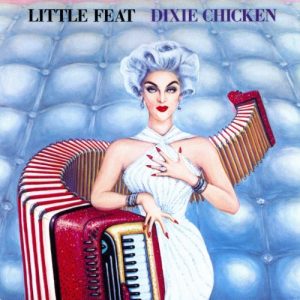 The second Sailin’ shoes will see the light in 1972 and immediately it will be well received by the critic (strange enough, those people were able of giving praise). The music is still not fully mature, but a lot of tracks contain the offset of what the essence of their future production will be.

Despite the very good reviews on both their first albums, an equal commercial success was not achieved. Roy Estrada split up and went to play with Captain Beefheart & His Magic Band. He was soon replaced by Kenny Gradney, while a second guitarist joined the group: Paul Barrere. At the same time, Little Feat will also gain a percussionist: Sam Clayton and so the quartet became a sextet. 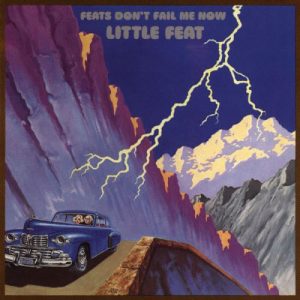 The new instruments and the more variegated musical heritages of the new formation, caused the band’s musical direction to move in favour of more immediate atmospheres, with a New Orleans connection and more funky rhythms. It’s at this point that the band will acquire their characteristic R&B or “Dixie” sound, where the spicy scent of okra and gumbo levitated their music onto a new and higher level.

Their next Dixie chicken (1973) is music for the body. Funk and R&B reign over all tracks. Don’t try to find experimentation, daring harmonies or convoluted themes. What you hear is what you get. Pure musical fun. 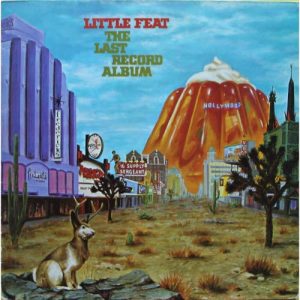 Feats don’t fail me now then comes out in 1974 and is more or less a continuation of the previous album, though we can start hearing some hesitant wink to fusion-jazz.

That will become more evident in the next The last record album (1975), a quasi-prophetic title, since Lowell George will detach himself more and more from the band, since his interest in jazz-rock or jazz-fusion equals practically to zero. 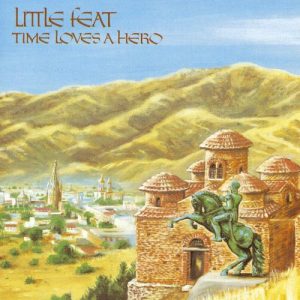 Barrere and Payne will  be the two motors of this change towards the fusion-jazz-rock music; so strongly, that we see George almost leaving the band and moving to the production of their next Time loves a hero (1977).

Lowell George’s interest in the band was waning and so was his health and he soon declared that Little Feat had disbanded. George died of a hear attack in 1979, leaving the others to complete the last Down on the farm (1979) without him. 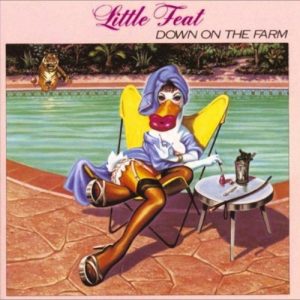 After George’s death, Little Feat ceased to exist as such, though in later years several original members reunited under the leadership of different musicians, touring and recording under the Little Feat’s name… but that’s a completely different story and doesn’t need to be told.