agma is the French counterpart of something between the German Amon Düül II and the British Hawkwind.

The general idea is quite simple: a musical expression that can be perceived directly by the inner mind, without the need of intervention by the conscious brain, then all translated into an alien language (the Kobaïan) that needs no dictionary but which can be phonetically comprehended by the unconscious mind… or something like that. 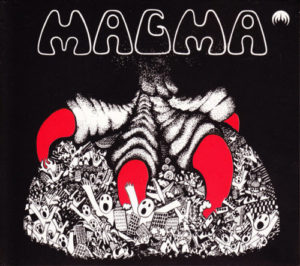 Fact is that drummer and founder Christian Vander, has managed to create not only a language, but a complete planet and space-dwelling race, descendants of a group of earthlings who fled an ecologically doomed Earth, while the music tells their tales and through that, should bring the human race into a new state of universal consciousness.

Vander himself defines his style, music and whatnot as “Zeuhl”, which in Kobaïan means something like “Spirith through matter” (L’esprit au travers de la matière) and that word has been used, later on, to address a specific stream of music that would influence many other bands, especially in Japan.

Christian Vander (drums) had met in 1969 René Garber (saxophone) and Laurent Thibault (bass) and together with them he recruited Lucien Zabuski (vocals) and Francis Moze (keyboards), to create the band Uniweria Zekt Magma Composedra Arguezdra, which was soon shortened (who could blame them?) to Magma. 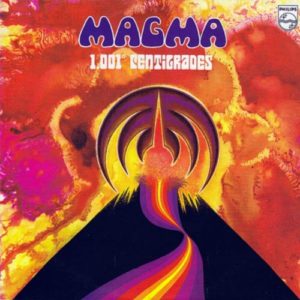 Their first, eponymous, Magma (1970) sends large schockwaves through the French audience and the reactions are very diverse. 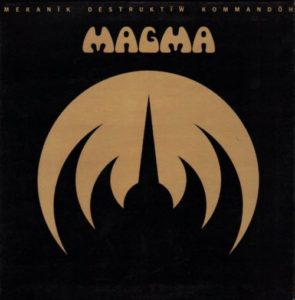 For unknown reasons, as soon as the album is released, another remodeling took place in the band’s composition: Engel leaves, while Charlery and Raux are replaced respectively by Louis Toesca and Jeff Seffer. Once again, the remixed band goes to the studio to work on their next release 1001° Centigrades (1971), which will break through the initial diffidence of the French audience and will ensure Magma a place in the next Montreaux Jazz Festival.

Once again, the band’s lineup changes almost completely after releasing a total flop album (only 1500 copies sold) under a different name (Univeria Zekt).

It takes until 1973 for Vander to set up Magma once again in a more or less stable formation and it is in this form that they will create what can be considered their Opus Magnum: Mëkanïk Dëstruktïẁ Kömmandöh (1973). 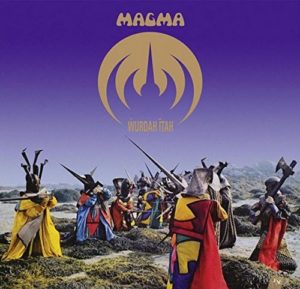 The label company would at first refuse to publish the album, but eventually it was released and was a success and probably their most famous release, so much so that Rolling Stones Music Magazine in 2015 will rank it at the 24th place in their list of the “50 greatest Prog Rock albums of all times”.

The music moves parallel to that of Amon Düül and the first Can, between electroacoustic rock, minimal and free improvisation, sometimes overcharged, martial and reiterative, while in others it seems to already define the canons of what, almost three decades later, will be called techno-trance. 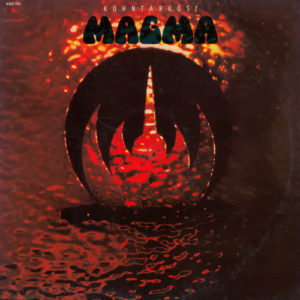 The following two albums will be well-received by the fans, but not so much by the general audience: an elaboration of the soundtrack for Yvan Lagrange’s movie Tristan and Isolde, now revamped with the aid of Kobaïan into Ẁurdah Ïtah (1974) and the studio album Köhntarkösz (1974 as well). As said, the music is very recognizable as it substantially remains at the levels already heard in Mëkanïk Dëstruktïẁ Kömmandöh, though there is clearly no evolution into something deeper or new.

After a one and half year long French tour, Vander once again shakes the ranks and people leave, new musicians come, replacements take place and so on, until their next studio album, Üdü Ẁüdü (1976).

The album tries to progress at the same levels of Mëkanïk Dëstruktïẁ Kömmandöh, though it sounds less fresh and inspired and leans quite vigorously on the dark and obsessive accents of the Magma musical tradition without being able to recreate the vibrance of the first albums.

When Magma produces their next album Attahk (1978), it is quite clear that they have nothing more to say. The album is a shameless wink at the more commercial market of soul, R&B and funky music and is only an empty simulacrum of the powerful and engaging musical tempest they could create at the beginning of the 70s. 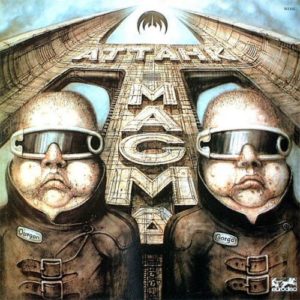 One more formation that will dissolve, reform, change clothes and whatnot just to reach one or other form of commercial success.

Once again, a very well deserved and by far too long postponed R.I.P.

Common sense is the collection of prejudices acquired by age eighteen