ohn ‘Mahavishnu’ McLaughlin is probably the most accomplished guitarist of the last 50 years (many will surely disagree, but it’s not for nothing that Jeff Beck called him in 2010 “the best guitarist alive”) and therefore Mahavishnu Orchestra will stand or fall by his sole presence.

John McLaughlin started to play the guitar at 11 years of age and by the beginning of the 60’s, he was already playing with great names like Alexis Korner, Graham Bond Organization and Brian Auger, though his most famous collaboration will be with Miles Davies, where he played on the immortal jazz-trompettist’s most famous “fusion” albums, of which Bitches Brew is perhaps the most representative.

Towards the end of the 60’s, McLaughlin will start to compose – and later on also play – his own work. 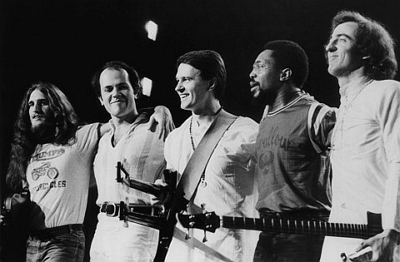 John McLaughlin has such an impressive production on his name, that discussing it in its entirety would be more than enough material for a very thick book… or two.

The sheer number and huge diversity of formations with whom he has played jazz, jazz-rock and fusion is quite astonishing, but it’s not the main topic of this article, though his whole musical style comes undeniably from the best and deepest roots of the white British Jazz.

Nevertheless, talking about McLaughlin, it’s talking about the Mahavishnu Orchestra, which is probably the most known manifestation of his composing genius and which will allow him to confirm and expand his fame of fast and impeccable executor.

The Mahavishnu Orchestra has manifested itself under many ‘incarnations’ and different formations, though they all revolved around the figure of John McLaughlin. 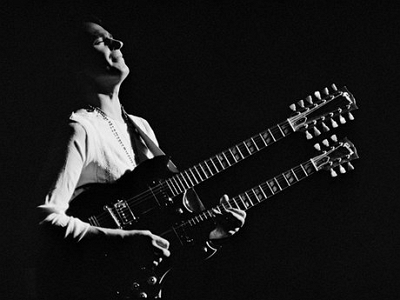 This is a multinational ensemble, being McLaughlin from the UK, Cobham from Panama, Hammer from the Czech Republic (Czechoslovakia at the time), Ponty from the USA and Laird from Ireland.

Once together, they can be considered as the most famous explorers and pioneers of what is generally called “fusion” or “jazz-fusion”, whose illustrious predecessors and creators were Miles Davis, The Free Spirits and Gary Burton.

Mahavishnu Orchestra will go much further than their predecessors and will propose a fully recognizable product that will perfectly amalgamate all those visions that had been developed by the earlier experimenters of the genre and at the same time create a fully developed ‘signature sound’ that the listener can immediately recognize and associate with the Mahavishnu name. 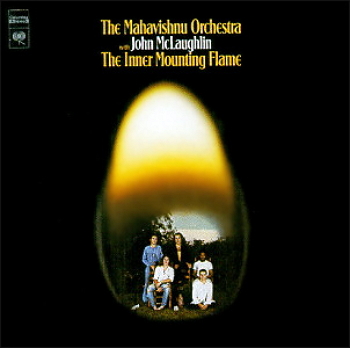 The motor of this formation will be formed by the duo McLaughlin-Cobham, who both played with Miles Davis on his unsurpassed Bitches Brew, the first real, monumental example of coherent jazz-fusion opera.

During this first Mahavishnu ‘incarnation’, McLaughlin will introduce what will become his “trademark” instrument for may years to come: the double-necked electric guitar (12 and 6 strings), that will allow him to switch at will between the two within one track or even a single passage, to lend a special texture and approach to the complex harmonics of his compositions.

Their first two albums are The inner mounting flame and Birds of fire, where the unity of sound is already recognizable. While The inner mounting flame is a typical ‘opus one’ product – incredibly promising and complex, but not yet fully evolved or mature – their second Birds of fire already displays their achieved sound signature, which will make them recognizable by the first few bars in all their future compositions. 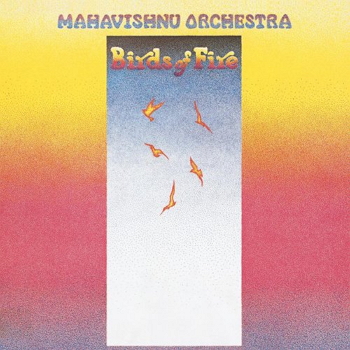 It’s a bit like the story of Van Der Graaf Generator, King Crimson, Yes, Genesis, Gentle Giant: you just need to hear a few seconds from a random track to know which band it belongs to. So it will be for Mahavishnu Orchestra: the first bars or the energetic use of rhythms and chords and almost invariably the incredible speed at which they are played, will make its music highly recognizable.

Both albums have exceptional tracks where one or more musicians will shine in a particularly brilliant performance, like the by now famous A lotus on Irish stream, where Goodman’s violin is absolutely spot on in every note and texture, or McLaughlin’s solo on The meeting of the spirits, to culminate in the wonderful opening of Birds of fire, where the first few bars set the level for the rest of this wonderful album. 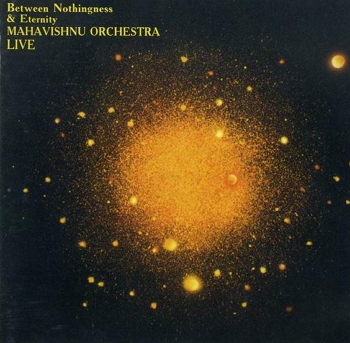 Their fame will be immediate, widespread and undisputed, which is probably the reason why they reached a crisis already in 1973, during a recording session at Trident Studios in London. Despite the attempts of McLaughlin to patch up the situation, the band fell apart and it will be only years ad years later – in 1999 – that those tapes recorded at Trident’s will be collected into what will be the “posthumous” album The lost Trident sessions.

In 1973 Mahavishnu Orchestra ceases de facto to exist, though the excellent live album Between nothingness and eternity comes out and is well accepted by the critic. 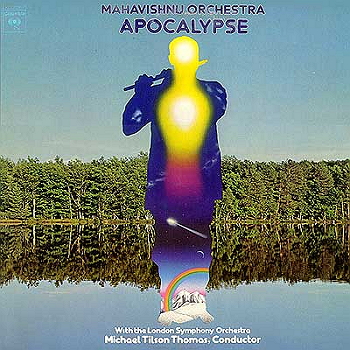 The new album Apocalypse will be recorded with the London Symphony Orchestra, followed by Visions of the emerald beyond, this time without a full orchestra.

Both albums will suffer slightly from the absence of Billy Cobham, but while on one hand I’m not very sure Cobham would have been able to fully perform with a symphony orchestra, in Visions of the emerald beyond, we see a Walden in optima forma, not missing a single beat and an incredibly fast, mature, coherent and an excruciatingly sensible John McLaughlin.

Once again the formation changes when – after a heated discussion about attributed writing credits – Jean-Luc Pony leaves in 1975.
Also Gayle Morgan leaves and is replaced on keyboards by Stu Goldberg: Mahavishnu Orchestra is therefore reduced to a quartet.

It’s under this formation that the last ‘true’ Mahavishnu Orchestra record is produced: Inner Worlds.

This is not a bad album at all, but the atmospheres are more subdued, the rhythms leaning more towards latin and funk and the total picture lacks the explosive creative power of the previous Mahavishnu works.

After this effort, John McLaughlin will close the Mahavishnu Orchestra chapter and will move on by forming his new group Shakti, which was often advertised as “John McLaughlin & Shakti” or “Shakti, with John McLaughlin”, probably with the sole aim to have a more famous and recognizable name on the billboards that would attract more public. 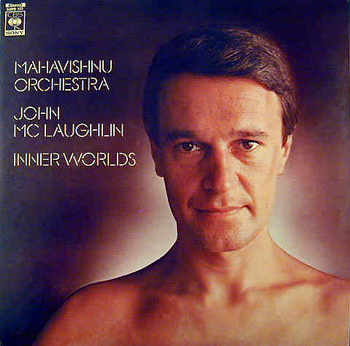 With Shakti, he will explore the Indian classical music tradition – which had always been one of his primary musical interests – making Shakti probably the first band originated in the West that successfully played for exclusively Indian audiences in India, and that should count for something…

After working with the most famous names of Jazz and Fusion traditions, McLaughlin will once again reform the Mahavishnu Orchestra in 1984, this time with Bill Evans (saxophones), Jonas Hellborg (bass), Mitchel Forman (keyboards) and original 1971 Mahavishnu member Billy Cobham (drums). 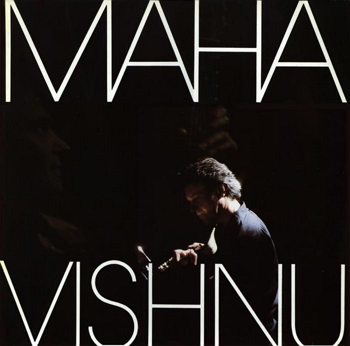 They will record the Mahavishnu album. Mahavishnu is also not a bad album at all, but the story had been told long ago and probably its greatest merit is to present the unfamiliar listener with a sort of time-lapse recording of the musical evolution made by Mahavishnu Orchestra through the years. Soon after, Cobham will leave and will be replaced – as happened before during the 1984 live performances – by Danny Gottlieb.

During this time, they produced the album Adventures in Radioland, where McLaughlin will leave his trademark double-neck guitar to experiment on the Synclavier synthesized guitar. 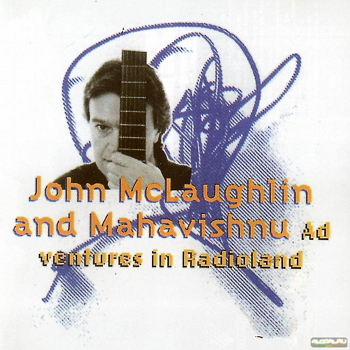 In 1987, Foreman will be replaced on keyboards by Jim Beard, but the groove is probably lost and the band will disappear from the musical scene.

While the name Mahavishnu Orchestra officially is no more, almost all its member – past and present – will continue to play as excellent sessionmen or will, in quite a few cases, start prolific and successful solo careers, like McLaughlin himself – attested by more than a dozen accredited studio albums – many collaborations, lots of live albums, and so on. 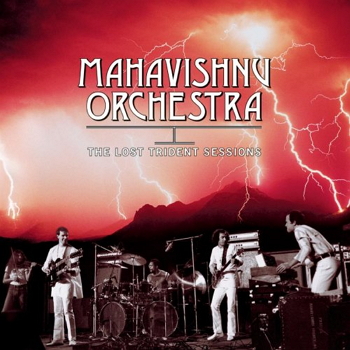 Al in all, like the good old Bruce Palmer would say: “The cycle is complete”. We saw Mahavishnu Orchestra move through the musical changes with grace and eventually die at old age of natural causes, without regrets and with a wonderful and refreshing legacy for the future musical generations.