heirs is the honor to have brought us one of the nicest, freshest and most electrifying rock sounds from the Land of Albion.

In 1968 they started by playing in several of the now mythical free concerts which took place in obscure locations at the periphery of London, featuring sometimes completely unknown bands, sometimes with groups like the Deviants, who were already a celebrity at those “live” gigs.

Their first album, Man Revelation, will be an example for many bands that, later on, will join the British rock-scene.

They will reach a more mature sound with their second album: Two Ozs. of Plastic with a Hole in the Middle (Yes! You got that, thank all gods and minor deities… That is the quantified mass and whatchamacallit description of a “Long Playing” record > vinyl > LP). Here, we can find a prelude to what will become the new face of the group.

Some will describe their sound as “electroacoustic”, which in a way is a kind of restrictive definition.

On the other hand, the same has been said about bands like Help Yourself, Hawkwind, Neutrons and Pink Fairies, who have been producing the most “refreshing” sound of the rock history (by the way: can anyone explain how the word electroacoustic applies to the Pink Fairies….?? If you’ve ever heard their music, then you should get my point. On the other hand, a song like ‘War Girl’ could be defined as electroacoustic… Maybe).

Some others (the more enlightened listeners, perhaps) will create a new word for the rock dictionary: “reiterative-rock”.

This has led to many unfortunate misunderstandings. 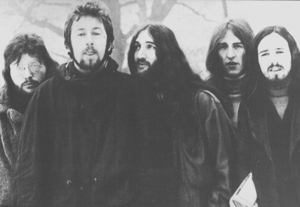 The word reiterative could be interpreted as “repeating the same over and over again”, which is absolutely the opposite of what Man’s music is.

The reiteration in Man’s music is just the formal structure on which the tracks are built upon, leaving the players free to roam through the phrases and detach them from their original patterns to create infinite variations.

Their album 1970, signs a break-through and represents the sum of the new identity that the experimental English rock was achieving. Just listen to the courageous Would the Christian wait five minutes? The lions are having a draw to catch a glimpse of the wondrous things to come.

When the Lyceum – an old London ballroom – opens its gates to rock concerts, Man moves from those small towns about 30 miles from the capital, and becomes the hero of those concerts from midnight till morning.

The attention of many people will be focused on this group that will open the minds and hearts of many.

They will also be the heroes and co-promoters of several “big events” of the London underground scene. Those events aimed to collect funds, stimulate and help new musical talents, by giving them a podium and an enthusiastic audience and – with a bit of luck – some extra money for their hard work. 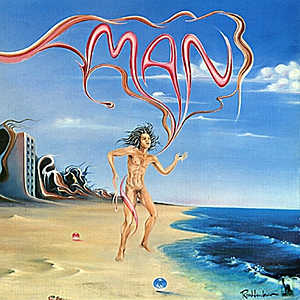 Those were true happenings where the spectators were really co-involved in the show and where the music was a true gift from the musicians to the listeners, without the self-indulgence of many other live performers, whose concerts will become in some cases a shame for the image of rock music.

Some of those legendary gigs have been taped and in the case of two memorable ones, have been collected into wonderful albums: The Greasy Truckers Party and Christmas at the Patti’s, which have become collectors items, and are still monuments to the underground rock history in their own right.

In the next couple of years, Man gives many live concerts, of which at least one has been recorder on a “limited number” album, the Live at Padget Rooms – Penarth, in which we can still feel the involvement of the public with the musicians (and vice-versa) especially in tracks like Many are called, but few get up and Daughter of the fireplace. 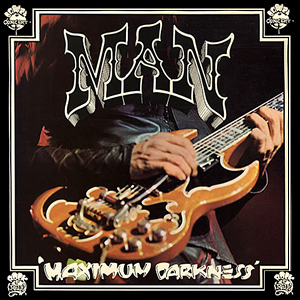 Those are a vivid examples of a rock, sometimes hard, sometimes melodious, that maybe only Daevid Allen, in his celebrated Banana Moon, has been able to fully convey to an audience.

In this formation, Man will put together what by many is considered their best album – perhaps not the most innovative one, but surely a bright jewel on the rock music’s crown – bearing the more than appropriate title of: Be good to yourself, at least once a day. 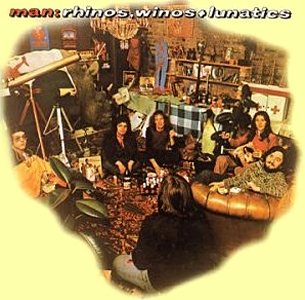 Listening to this music is indeed “being good to yourself” and the three album’s tracks Bananas, C’mon and Keep on crinting, are absolutely fabulous (personally rated as the best album of the 70’s, and why not of a lot of other years as well… Listening is believing).

Also to be mentioned is the wonderful “centerfold” Man’s Map of Wales that only the lucky owners of the original record (like yours truly) can appreciate in all its playful, cheeky protest. 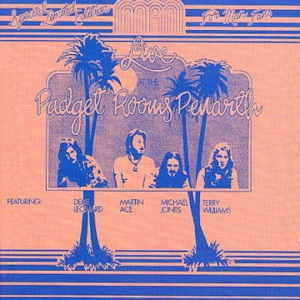 It’s noteworthy – and also a very reassuring thought – that a band like Man – all from Wales and all very involved in the cultural and political fight for their Welsh identity – never ended up in making just protest songs or folk-a-like music, but were capable of producing an original and solid sound without compromises from start to end.

Their later albums, Rhinos, Winos and Lunatics, Slow Motion and Maximum Darkness (this last one with the excellent guest guitarist John Cipollina) are solid, but something has been lost… Perhaps the will to experiment. 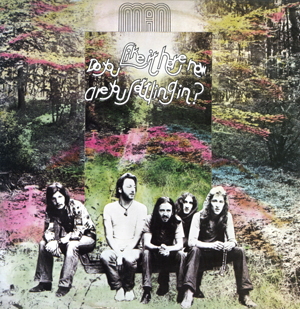 Nevertheless, Man is one of the few realities of the English rock that will still keep a tight connection with their public, free of compromises and full of joy, leaving their music as an heritage, a treasure that I’m sure many future musical generations will appreciate (when they will bother to pay attention).

Getting information off the Internet is like taking a drink from a fire hydrant.