his is a legendary formation, being the legend due – if we want to be 100% honest – more to their political image than their music.

All its components live in a multimedia community in the Detroit area, that will soon become famous as the Trans Love Energy.

Their meeting with John Sinclair will start a period of deep political involvement and their music will be hard, dirty, smelling of the sweat and desperation of the assembly lines.

Detroit is the city of the big factories and mass industry and this music is made to shake down the establishment, not to entertain.

There will be no elaboration of country notes coming from MC5, just hard rhythm ‘n’ blues, sometimes enriched with the temporary use of some jazzman from the urban ghetto’s.

By the time their first Kick out the jams is published, MC5 is already a legend.

The composition by SunRa, Starship, is distorted to the limit by the feedback beyond recognition. Motor City is burning is an assault against the alienation of the factory work. 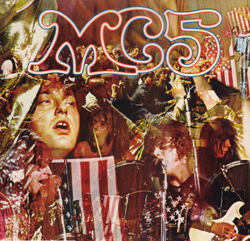 Every concert becomes an happening with political slogans and burning American flags.

Then John Sinclair ends up in prison, framed by one of his personal enemies, a narcotics agent who will put two marijuana cigarettes in his pocket and then arrest him.

Sinclair will get 9 years (!) for this, a mere revenge for what he has said and written.

From now on, many protest concerts – MC5 will participate to most of them – will be held to demand Sinclair’s release.

Sinclair the rebel, the founder of the White Panther Party, the hero of the factory workers, will be set free more than two years later, but MC5 will never be the same.

Those new records will spread a smelly scent of business, the will to stay famous.

Their music will be still hard, but the ideals are gone.

Just like Pop Group will harshly growl, years later: “We are all prostitutes, everyone has his price”. 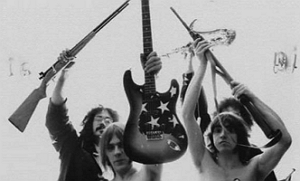 John Sinclair will write a book about “counter-culture”, a kind of manifesto to explain, among others, the role of music in the political struggle.

Revolutionary music, whose lyrics or intentions are not its final reason of existence.

Its force and function is in the charge of rage that it expresses, the rage of a protesting generation.

The MC5 story has an unhappy end, between quarrels about money, law-suits and lost chances, but their testimony remains: music as a mean of political and social rage.