National Health’s music can be considered as the most lively, extrovert, complex and in a way, most successful evolution of the Canterbury sound.

Its members belong to the pantheon of the most creative and skilled musicians of the Canterbury movement ever.

Coming from as many different streams of the Canterbury musical universe as Gong, Matching Mole, Gilgamesh and Hatfield & the North, plus a couple of the most accomplished progressive-rock band, like King Crimson, just to name one, they team together to offer a sound that transcends the very concepts of musical diversity which characterize the whole Canterbury sound. 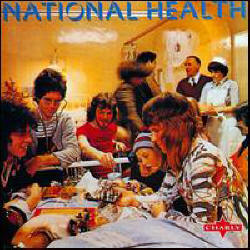 Exactly like other – perhaps more known – Canterbury bands, they play a music with a perfectly recognizable sound and metric.

Its perfection is maybe only equaled by the musician’s complete indifference for any fashion of the moment or the commercial needs of any music label or radio station throughout the UK and abroad.

They team up for the fun of being together and play what they most like and what they are best at: precious, shining, pure Canterbury gold. 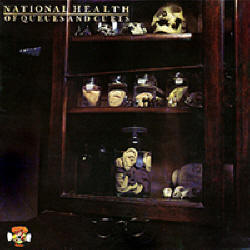 Within National Health, Canterbury seems finally to reach its equilibrium with the white British Jazz, something that had always been present during the whole Canterbury history, sometimes in subdued and subtle forms (Caravan), sometimes as a logical intellectual consequence (Soft Machine) or as an interesting research field or as a metric contamination element (Hatfield & the North).

Whatever the reason for this “contamination”, its effects are not one-way.

Not only Canterbury will profit from the rhythmic and metric of these jazz influences, but also a whole new stream of jazz will take elements from the Canterbury musicality and make them their own.

I have often heard celebrating comments on bands like Spyro Gyra or Brand-X aimed at their typical sound which could not be entirely traced back into the typical British white jazz canons and therefore it has been assumed as an intrinsic innovation within that stream.

Well, if we listen carefully to their music, it’s quite easy to recognize phrases, chords and rhythms of a typical Canterbury heritage from bands like National Health and Hatfield & the North, and then assimilated into the new musical context. 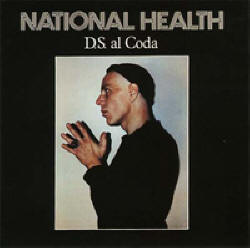 National Health released only 3 albums (all of them studio recordings): the first, eponymous National Health in 1978, followed by Of Queues and Cures (1979) finally and radiantly followed – after a long studio silence – by DS al Coda in 1982.

In all three albums the music is highly recognizable even though the formations are constantly changing, with here and there members parting, coming back, parting again, coming back again, and so on.

This is not unusual of surprising, if we think how dynamic and in continuous evolution the Canterbury scene was.

The only steady platform remains Canterbury and its wonderful collection of gifted musicians and innovators.