xtraordinary and unusual formation reaching out from the Florida swamps.

They have succeeded in giving their almost acoustic folk a indefinable atmosphere, between LSD-induced visions and pure poetry, gathered in two of the most inscrutable and fascinating albums of all times: One Nation Underground and Balaklava.

Tom Rapp is their inspirer and brilliant poet.

The fact that he has a slight speech-defect, makes his singing even more intriguing and absolutely fascinating.

The apocalypse is always prying just around the corner, but somehow this is not a terrifying event.

Pearls Before Swine are able to let their music convey a dreaming sensation, a sometimes morbid glance at life and death, a place where finally peace will come, a psychedelic abandon to the tides of all things surrounding us, sometimes in rebellion, sometimes in acceptance.

The front cover of One Nation Underground shows a detail from “The Garden of Delights” by the Flemish painter Hieronymus Bosch, which reminds us more of a scene from Dante’s Inferno than a peaceful garden. 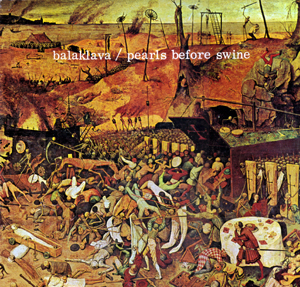 Their other masterpiece, Balaklava, displays on the front cover a detail of “The Triumph of Death”, by another Flemish master, Breughel the Elder.

Both images are disconcerting, especially for their sense of incumbent tragedy, of total and eternal damnation.

And still, Tom Rapp is not the minstrel of doom and damnation.

His voice and music invite the listener to take a walk in this horrible place and holds a hand to remove the fear and to comfort, sometimes with a sweetness that seems to come from a benevolent ghostly guide.

Pearls Before Swine’s sound is linear, uncomplicated and still kaleidoscopic.

They use, with a good amount of ingenuity and open-mindedness, some instruments that are not part of the usual arsenal of the bands of that period.

Tom Rapp – later to become a quite successful lawyer – sings and plays guitars “one at the time, mostly” – he says.

From the song Another Time, whose lyrics seem to come directly out of the “Tibetan book of Life and Death”, to the medieval atmosphere of Ballad to an Amber Lady or the wonderfully childish (Oh Dear) Miss Morse. Even the protest song Drop Out (about “The Bomb”) is kind of gentle, almost reassuring (“…Just be yourself and no-one can step inside your mind…”) but with enough power to shake you awake.

The lyrics are coming from sometimes very unusual places, like the ones from I shall not care, partly inspired by the inscriptions on a Roman tomb, or like the wonderful Translucent Carriages, with parts from a story by Herodotus. 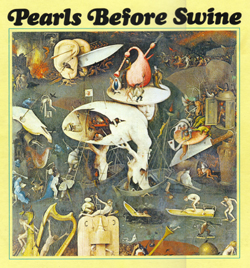 On the album Balaklava, the basic formation is slightly changed and largely expanded with numerous guest artists.

The sounds of Balaklava are still very “Pearls Before Swine”, with an extremely delicate arrangement of the famous Suzanne by Leonard Cohen.

Other little masterpieces on this album are The Translucent Carriages – with the lyrics inspired by Herodotus – the beautiful There was a Man – probably about Jesus – or the sweet Guardian Angel – sounding like the old 78 rpm recording of a long forgotten nursery rhyme.

And what to think of the two original fin-de-siécle recordings – made, by the sound of them, on old wax rolls – one from some trumpeter Landfrey (one of the survivors of the Light Brigade on the charge of Balaklava) and the other one from no-one less than Florence Nightingale herself, wishing those men from Balaklava: “…God bless my dear comrades at the battle of Balaklava and lead them safe to shore…”.

Even those two strange recordings amalgamate in some awkward but perfect way within the atmosphere of the entire album.

Pearls Before Swine presents us with delicate images of extraneous poetry and beauty.

Moments that are to be lived first, then understood… Not the other way around.