his music comes from another planet. Or actually, a complete universe can be created on and sustained by the notes of the Penguin Café Orchestra.

Simon Jeffes has been, with all merit, the beating heart and mind that conceived the Penguin Café “world”.

He spent a great part of his early life traveling all over the world, then studied classical guitar and music composition at an English music college, just to realize how limiting the canons were of what he was learning.

That coincided more or less with his profound and enthusiastic “discovery” of ethnic music. 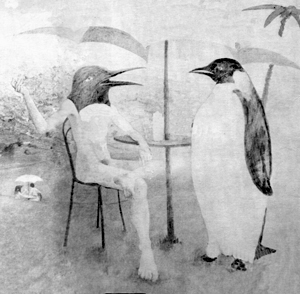 Ethnic was in Simon’s case not restricted to one kind of folkloric musical manifestation, but ranged from Japanese to African ethnic music and all what was in between, before and after.

However, the irony of it all is that he did not conceive his idea of the Penguin Café Society Orchestra from consciously putting all the pieces together and elaborating some kind of theoretical musical universe that had to be expressed in one way or the other… None of this whatsoever.

The whole Penguin Café universe was, directly or indirectly, the result of a bad indigestion…

Suffering from a severe food-poisoning, Simon had a delirious hallucination of an Ark-like hotel, made of separate concrete rooms.

In one room, there was a couple making love but lovelessly. In another, someone was just looking at himself in a mirror, and in another one a group of musicians were playing behind huge arrays of synthesizers, wearing headphones, with no sound being produced… everyone was just interested in him/herself.

There was no life, no interaction.

After a couple of days, during his recovery, a poem popped into his mind:

“I’m the proprietor of the Penguin Café.
I will tell you things at random…”

and so it began.

The essence was that life is about a certain amount of randomness, surprise, unexpectedness, spontaneity, together with the acceptance of living the present with no fear about ourselves, what we really are. 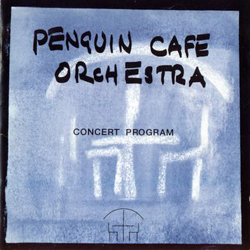 Someone has described the music of the Penguin Café Orchestra as “a big yes to the heart”.

Jeffes himself described it as “imaginary folklore” or “modern semi-acoustic chamber music”.

Looking beyond any definition, the fact remains that the PCO – as they are mostly known – is a totally innovative way to intend music, a way to make music that tends to dissolve all boundaries of time and space, without becoming a shadow of itself.

A place where people from otherwise totally different – or even opposite – cultures can meet and recognize each other.

These assumptions make the PCO a place where musicians are not bound by any strict rules and this is also reflected by the extremely “loose” assets of this group, as small as a quartet or as large as a 10-men orchestra, depending on the occasion or on the specific track performed.

I remember a concert I had the fortune and honor to see in Perugia (Italy). The scenery couldn’t have been more impressive: the wonderfully decorated Renaissance “Sala dei Priori” (Prior’s Hall) in the very center of this splendid little city (by the way, one of my favorite Italian cities and also the place where I fell head-over-heels in love with the young woman who soon after was to become my wife).

The whole PCO was there (10 people) and when the piece being performed required less than 10 musicians, the remaining ones just scattered through the hall, taking a seat among the public – “Hi mate, do you mind if I sit down here until I’ll be needed to play the next one?…” – and joining the public in the standing ovation that generally followed the end of each piece.

Most agreeable was that, during the pause, we all sat together on the sunny stairs outside the Palazzo (Palace), chit-chatting and consuming sandwiches and beer, until someone (Simon Jeffes, generally) gave a sign to musicians and audience alike – “OK people… Time to go back inside and have some more fun…”. 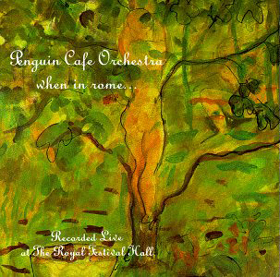 That is the difference between unreachable rock/pop stars and true human beings.

Their first “official” appearance was in 1973 in London, where a non better identified group of musicians played under the name of Penguin Café Orchestra, also defining themselves as “The 4 Musicians in Green Clothes”.

The first PCO single was recorded with 2 tracks: Penguin Café Single and The sound of someone you love, who’s going away and it doesn’t matter.

Soon after, Steve Nye introduced PCO to Brian Eno, who had just started to conceive what will become his memorable “Oblique Strategies” project, and had just put up a new music label for that project: Obscure Records.

Brian Eno was instantly fascinated by the PCO’s music and dedicated one of the first volumes of his “Obscures” to them.

The recordings were made in Simon Jeffes’ garden, on a Revox portable tape recorder and with a budget of no more than 1,500 Dollars…

PCO delivered a masterpiece, entitled Music from the Penguin Café.

This delicious, inimitable and timeless treasure attracted many other friends to join PCO in this adventure. 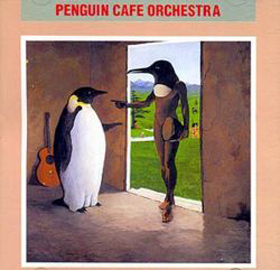 One of Simon Jeffes’ friends, university English lecturer Neil Rennie, brought along his ukulele and some lyrics he had written down for some other occasion and never used.

Jeffes’ partner at the time, the painter Emily Young, sang on a couple of pieces and donated a whole series of surreal paintings of Penguin Café life, that became the album artwork.

Those images of half-penguin half-human figures will remain a kind of trade-mark of the PCO.

At this stage, Simon Jeffes was exploring the possibilities of many strange and diverse instruments, from the spinet to ring modulators. He said:

“Because I’m a composer, I get to do whatever I like
…
It’s almost as if in some past life I must have played those instruments because when I pick them up, most of them, I can make a nice sound almost instantly, oboe excepted”.

A series of gigs and concerts followed the first album and their ranks expanded.

Geoffrey Richardson, a former member of Caravan, played viola – and quite a few other things – at some point or another.

He brought along his friend and accordionist, Peter Veitch.

An instrument maker with an aptitude for the oboe, Giles Leaman, helped out on woodwinds.

The rhythmic elements in the music were emphasized by a non better identified character named Braco, while Julio Segovia added the cymbals to the PCO’s arsenals. 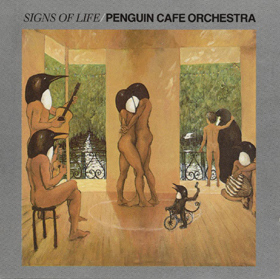 Many records have followed, all of them full of astonishing pieces that are true musical gems, which retain their fascination and freshness, even after years, making the PCO music, in a way, timeless.

PCO was, and still is, an ever-changing microcosm of musicians that gravitate around an idea (more than a specific person).

Even after Simon Jeffes’ tragic death, in 1997, his words, ideas and musical concepts will still inspire the members of the Penguin Café Orchestra to produce those perfect sounds and highly humane music, making the Penguin Café an imaginary but absolutely necessary place for all of us.

Too many pieces of music finish too long after the end.