t’s almost impossible to think about any Canterbury development without mentioning them.

As for the majority of the exponents of the Canterbury Music who survived the 70’s, we have to make a distinction, a kind of “before and after” comparison.

Soft machine is no exception: they thrived in the 70’s and lived on even after the whole Canterbury movement was long forgotten, but by that time they were just a ghost of what they had been, a formation eventually fallen into a lengthy, creative void, obstinately trying to keep alive what was already gone a long time ago.

Once more, The Wilde Flowers is the common root and the mythical Canterbury is the catalyst.

Even before the name Soft Machine was born, these musicians played together in several occasions.

We are in those hectic years, when everyone played with everyone, as long as there was fun, while good music was made for anybody who wanted to listen to it.

There are no “official” Soft Machine albums from that period except one small jewel, put together by Giorgio Gomelsky, from a collection of tapes and demos that were intended for “an eventual LP”.

Published in Italy by the courageous independent label Charly Records, this At the beginning shows, on the back cover, a splendid note by this great producer: 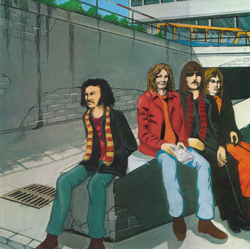 “WARNING: This series is a kind of sound chronicle of what happened in England between 1962 and 1967. It is not a complete history – some of the artists were, and are, inaccessible. It contains a fair amount, however, of what was (and is) relevant.
Some of the artists performing here – then unknown – are now Rock Superstars, some are dead and some have fallen by the wayside. But all of them contributed their fair share to a musical revolution whose effects will be felt for a long time yet.
I had the good fortune (and good judgment – if you pardon my vanity) to be around at the time and it became my vocation against all kind of odds to make some of these events possible.
Even though others have later on cashed in on it, I am glad that it was within my means to nurture the movement. Happenings like these only occur once or twice in a generation.
The technical quality of some of the recordings is far from satisfactory. Many of them were improvised, on the spot, without rehearsals or grandiose equipment. I hope that the authenticity of some glorious musical – and human – moments well compensates for the lack of polish. Anyway, music is made by people for people, and no one is perfect.
Giorgio Gomelsky.”

Nobody’s perfect, that is true, but this collection lets the listener believe that perfection will be found just around the corner.

It’s almost a miracle that people so different in their musical background and personalities could achieve such an organic, unique “sound”. Looking at them individually, one would never think that they can produce such a compact, intense and still captivating music.

The impish Australian surrealist Daevid Allen (guitar); Kevin Ayers (bass, vocals), floating about like a moody cherub; Robert Wyatt (drums, vocals), a creative artist with an intense gentleness and Mike Ratledge (piano, organ) with a volcanic sense of intellectual musical concern, create moments of pure poetry and musical exploration that will be the basis of many great things to come.

It’s enough to listen to tracks like When I don’t want you, or That’s how much I need you now and the splendid Memories to realize that these people have pushed the concepts of psychedelic, rock, jazz and R&B music to their limits and gone far beyond, creating something completely new.

This quartet will navigate, during this first period, in a free and ever changing sea.

Ratledge will forget about philosophy and his intellectualism to start eating bananas – those bananas being one of the ever present crazy symbols during the whole Canterbury music era – while singing mealy choirs with his friend Daevid Allen.

A tour in France – in ST. Tropez, of all places! – then a tour in the USA as supporting group for the legendary Jimi Hendrix and their music becomes something serious. 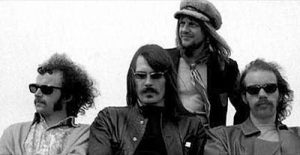 So serious that Daevid Allen leaves the formation – Daevid needs humor more than he needs air to breathe.

Reduced to a trio, Soft Machine searches for unity. They find a catalyst in Hugh Hopper (bass). His solid mental and technical inclination will revive Ratledge’s interest for philosophy, metaphysics and musical theory.

Robert Wyatt’s voice gets a little more hoarse but it expands in register and versatility… and he is still able to sing the solo score of Charlie Parker’s Donna Lee by memory !!

The group’s creativity is fermenting.

Their second album sees Kevin Ayers leaving Soft Machine to become the cheeky cherub we all know, while the trio (again) evolves in what we could call their Dadaistic and introvert appearance.

Elton Dean (brass) joins them and the formation is ready for their quantum leap, their astounding Third.

This album is so complex that you need to listen to it over and over again to be able to comprehend its totality, while it remains actually so beautifully simple and organic, that it will immediately captivate the listener. 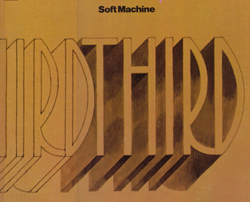 On this double LP (sorry, but I still have lots of vinyl. And that’s it…) we can find one of the most intense and tearing songs that Canterbury will inspire: Moon in June.

Try to listen to this track and simply stay untouched by it.
If you can, well, then there’s only little hope left for you to ever become human again.

The intensity and beauty of Wyatt’s vocals will only be equaled, by Robert himself, in his Calyx – with Hatfield & the North – or Muddy Mouth/Muddy Mouse – on his solo album Ruth is stranger than Richard.

Ratledge shows, through the whole record, repeating phrases and sequences that are influenced – perhaps only marginally at this point in time – by some forms of contemporary music – Schöenberg, Tzara and perhaps a Minimalist or two are peeping through the bars.

Elton Dean excels on all tracks on his saxophone and Hugh Hopper’s metronomic – and yet not mechanical – bass, bring the whole composition to an unsurpassed compactness.

The long suites on this double album are truly exceptional compositions, harmonizing with each other in the whole context, but also being capable of surviving on their own, as individual pieces of music. 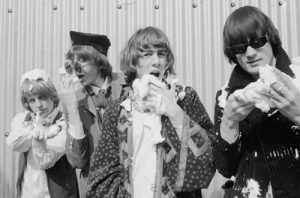 From this point onward, Soft Machine will fall into a creative void, here and there overwhelmed by some good jazz, which is not enough to preserve the freshness of Third.

The Canterbury influences will disappear – and so will the intelligent Wyatt – leaving Ratledge alone with several new members to produce the passable but absolutely not noteworthy Fourth, Fifth, Six, Seven and finally Bundles.

They display a honest, but banal, professional sound.

Several disastrous concerts with nothing news to tell, mark the way down and Soft Machine will become sterile, with all their tours confirming this, unfortunately.

Personally, I prefer to think that Soft Machine decided to stop soon after Third and its members agreed to go each one’s own way and that it is just a coincidence that Ratledge chose to go on with a complete new group and decided to name it Soft Machine.

This would have been a much nicer end.