hey can be considered as the Father Founders of what has become more widely known as New Wave.

Not that they were the first to play that music, but they had enough success to make it known to the general audience.

The New Wave is not an organic musical movement that can be described and labeled within specific borders (just as the adjective “rock” can be almost anything).

Thank all gods and all minor deities, no music worth of this name can be categorized that strictly.

Nonetheless, all formations that tried to escape the “classic” rock scene and at the same time to avoid being assimilated into the Punk one, were sooner or later labeled as belonging to the New Wave which, in many cases is quite unfitting…

Television was earlier known – with a slight different formation – as Neon Boys and was founded by the more than interesting figure of Thomas Miller, who will soon adopt the artistic name of Tom Verlaine.

His intense guitar play, accompanied by exceptionally good lyrics, will be the basis on which Television will move their steps. 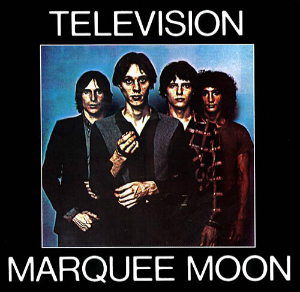 The slightly out-of-synch choirs and Verlaine’s sometimes out-of-tune voice, all drip urban alienation and while on one side they seem willing to escape it, on the other hand they just dive head over heels into it.

Whatever the outcome, songs like See no evil, Venus, Marquee Moon or Guiding light are spectacular examples of a music which has escaped the Velvet Underground prison and is now roaming free through the dangerous streets of New York at night. 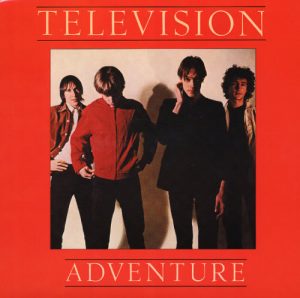 Their following Adventure comes out mid ’78.

Adventure is less angular and compact of the the band’s first album, leaving the jagged rhythms and the wonderful tensions that characterized Marquee Moon far behind in favor of a more accessible product. They seem in search of a more “pop” approach and ditto audience.

Despite the well meant effort and essentially caused by the lukewarm reception, Television will not have anything new to report and will soon disappear.

Tom Verlaine will pursue his solo career, which will see him still as a great songwriter, but without the “punch” he had with Television.