is music has probably nothing to do (anymore) with Rock.

However, it develops and moves mostly in the stream of all those experimentalists and minimal musicians that have been, in one way or another, influenced by the wide and eclectic panorama of the Rock music.

Riley is, in essence, an experimentalist and a composer, who applies new and almost mathematical concepts of the musical theory to a final product that is everything but a sterile calculation of phrases, pauses and measures.

His career starts with playing Ragtime piano music in several nightclubs and cafe’s of the Californian Bay Area.

After a while, he moves to Europe, in France. There, between Paris and the Cote d’Azur, he plays piano in all kind of cafe’s, nightclubs and cabarets.

During these two years, he perfections his technique – already conspicuous – and matures his theories about experimental and minimal music and improvisation.

He is also a proficient sax player, but keyboards fascinate him because of their wide octave ranges.

After a while he moves to Sweden and will compose music for the Royal Swedish Academy of Music and for the Swedish Radio, while playing also in street theater productions. 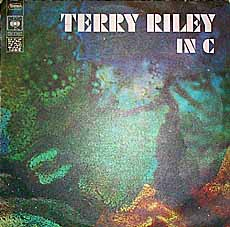 It is during this period that he will compose one of his most famous tracks Poppy Nogood’s Phantom Band, for soprano and multiple anticipated pre-recorded tracks.

Once back to California, he experiments feverishly on the soprano sax, electronic keyboards and multiple serial electronic tracks, sometimes days after each other, without interruption.

Here he joins some other musical and performance experiments by La Monte Young and Robert Benson.

In 1964 the final version of what is probably his most famous composition, is published and performed: In C.

This is a genial piece of composition, complex and still very linear.

The music of In C moves on 53 synchronized phrases that are widened on a so-called “Pulse” – a track where a couple of notes must be modulated with variable intensity, on the last two octaves of a piano – all this for the whole duration of the performance.

Even a group of amateurs can play In C, but only real musicians – capable to move freely between free phrasing and interaction – can elevate this suite to a piece of art.

During the phrasing, all performers are free to stop playing or improvising as much as they wish.

The performance, however, will end only when all musicians will reach the 53rd movement. 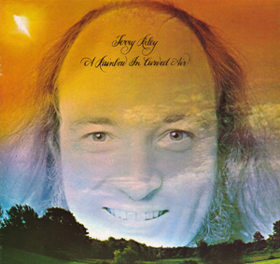 The quality of the performance will depend on the amount of interaction and cohesive force that is established among the musicians and makes every execution of In C a different experience for musicians and listeners alike.

A “good” performance of In C sees the creation of tonal groups and sub-groups and their solution in a tonal panorama that will unfold for the duration of 45-90 minutes, passing through phrases in C, E, C and G.

The music of In C transcends the sterile technical explanation of its structure and moves – with extreme fluidity – into a musical space of its own, enchanting and intriguing the listeners and it’s a real joy to play (so say the performers…).

Riley will record for the Columbia label, a very famous session of In C with the “Pulse” managed by Margaret Hassell and her students at the Buffalo Centre of Creative and Performing Arts.

The base is played on 11 instruments, then two more tracks will be superimposed on the original one – by the same group of musicians – the first one counting 10 members and the second one 7.

In this way, this version of In C sees vibraphones, saxophones, trombones, violins, flutes, oboes, fagots, marimbaphones, clarinets and a piano added to the whole ensemble.

In C is not an easy tune that you can whistle while shaving or washing dishes, but it’s certainly one of the most impressive compositions of the somewhat more “commercial” minimal music. 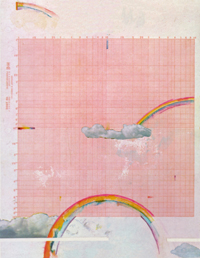 It is a piece of music that will take its place at the same level of the perhaps more famous minimalist Steve Reich, whose masterpiece – Music for 18 Musicians – will mark a whole musical era.

Later on, Riley will compose what will be his most famous piece: A Rainbow in Curved Air. While in In C, the final result of the performance is dependent of the interaction of several musicians, in A Rainbow in Curved Air, Riley plays alone, over-taping and mixing multiple recordings and virtually kilometers of tape.

Here we see Riley playing organ, electric harpsichord, rocksichord (whatever that might be), dumbec, tambourine and the omnipresent “Pulse”.

The work is not bound to different interpretations, the musical flux is compact and centered on one performer, which makes A Rainbow in Curved Air perhaps more “consumable”, but not in a negative way.

The contact with the listener is here more direct, not mediated by the interpretation of some other musicians.

The waterfall of sound is sometimes soothing, sometimes electrifying, with the “Pulse” bearing the rhythmic evolution of the whole composition back to a constant entity in a constantly changing harmonic development.

On the other side of the record (vinyl über alles !!!) we find the final version of Poppy Nogood and the Phantom Band, with soprano sax, pre-recorded tapes and organ (this last was not on the original concept).

Here again the product is more than interesting, but it’s standing perhaps a little bit in the shadow of A Rainbow in Curved Air. 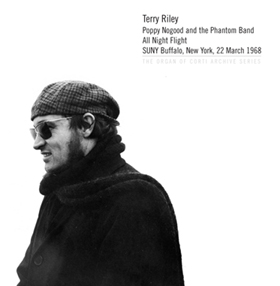 After this album, Riley will collaborate to various projects together with many minimalist musicians and will reach a deeper maturity as a composer.

His music and composition technique will be more theoretical perhaps, but still incredibly interesting.

One example that is worth mentioning is his Persian Surgery Dervishes, again moving along pre-recorder and repeated serial sequences for the low frequencies, while the rest is modulated by an harmonic progression of seven chords on the organ.

Later on, The Happy Ending recordings will mark a more orchestrated approach to his own ideas on composition and is a track that has the merit to be more clear to – almost – any listener.

At this point, Riley will start experimenting with his own voice and the study of the Indian Raga’s, which will make his music less intelligible to the occasional listeners or to those (like yours truly) who have an acute idiosyncrasy for “Indian contaminations”.