With vocals, guitars, drums and then brass and violin and seven people on stage, the name The Flock seems to be more than appropriate and constituted a rather unusual and numerous setting for that time (1969).

They move between rock, jazz, country and blues, or better, they roam over all those styles, preferring not to stick to any of them and this is exactly where they are genial at and also what will be their condemn all the same.

And they actually succeed at both.

They produce a kaleidoscope of sounds that very often have the sole function of expressing their humor and joy of living.

At the same time, we are not looking at a bunch of clowns that use music to underline their histrionic jokes (like some malicious souls will say of the Bonzo Dog Band), far from that.

The music has very deep roots in the traditions of the blues, country and jazz that were at that time unfortunately overshadowed by the big psychedelic-rock explosion on both West and East Coasts. 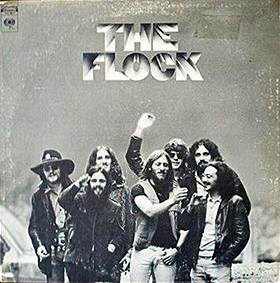 Testimony of their musical weight is the cover note for their first album (The Flock), by no one less than John Mayall, who writes, among other things:

It seems sort of strange that I should be writing a liner for a band that I’ve only heard three times before this night… When I heard them… I got close to going berserk over their prodigious and varied musical talent, as a whole and individually…

I really am impressed to the point of wanting to shout praises for a band that is in the process of presenting to us an exciting new direction in contemporary music: a subtle fusion of sounds drawn from the bedrock of blues, jazz, gospel, rock, country and many other sources…

The Flock will make one more album, Dinosaur Swamps, which will be of the same overall quality and interest and will stay appreciated by just a small group of people, before the band disappears from the musical scene. 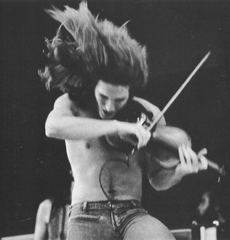 Or better, they will disappear from the “known” musical scene, while they will continue to perform here and there in the US in small gigs where the public will jump enthusiastically to their rhythms, but that unfortunately will not be enough to guarantee the formation’s commercial survival.

And probably, The Flock themselves did not want that either, preferring to continue making music without the restraints of what “the market” wants them to play.

Sole exception will be Jerry Goodman.

Already during his performances with The Flock, he knew how to stupefy the audience with his virtuosity on the violin and his creativity, bringing this quite unusual instrument – at least for the rock scene – into the footlights.

This will attract the interests of many, critics and fellow musicians alike, with eventually an offer by John McLaughlin himself, who proposed Jerry to join the Mahavishnu Orchestra. 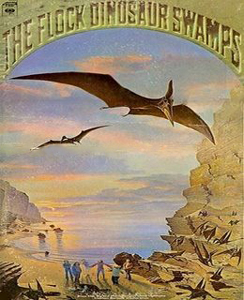 This will be a total turning point for both Goodman and McLaughlin, but it will deprive The Flock of one of its most creative players and musical motor.

Nevertheless, The Flock will not blame Jerry for leaving them.

They’ll go on playing the music they all love.

They will briefly reappear in 1973 for a series of concerts.

These will not be gigantic events – like we are used to by all other “rock-stars” of that period – but will again confirm that The Flock is still alive and kicking… and having a terrible lot of fun playing together.

What did happen to The Flock after ’73?

No one knows, but I’m sure they deserve to be remembered as one of the most unconventional little gems that adorned the American music scene of those years.

When a programming language is created that allows programmers to program in simple English, then it will be discovered that programmers cannot speak English.