orn from an unconfirmed quote by producer John Fenton: “I want a no-bullshit, working class band – I’ve had enough of all this pseudo peace crap…”, the name Third World War will be synonym of hard, raucous rock and an attitude for revolutionary lyrics.

In 1970, the band went directly to the studio to record their first, eponymous first album, even before playing any live concert.

The whole product is hard, rock-hard, and so are the lyrics with a couple of rough diamonds like Ascension Day and Get out of bed you dirty red.

Third World War could be compared with the most leftist and revolutionary manifestation of the Deviants, though they are missing the refined musicality that the Deviants are able to infuse even into their most extreme tracks.

We see something that reminds of the political belligerence of MC5, though in Third World War’s case it’s not backed up by a parallel political movement, at least not on the foreground. Not yet…

The band went back into the studio, with a slightly re-arranged formation. Their label (Fly Records), dissatisfied by the low commercial success, tried to make their product more palatable to the audiences and therefore asked that one track (Coshing Old Lady Blues) was to be removed because too offensive. 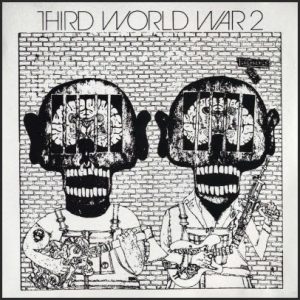 Fenton refused and took the disagreement as a chance to move on to a different label. Third World War II came out in 1972, including the controversial track.

Despite the release of the finished product as it had been meant to be, the sale figures were desperately negative and the management, now completely out of money, could not even pay the musicians for their studio time and Third World War disbanded definitely, never to play again.

Musically, maybe not a great band, but had they had the fortune to come together a decade later, they may have reached quite some popularity on the crest of the punk era.

But it would be a mistake to ignore them completely, either.