riel, or the band that did not exist… It sounds like the title of an old novel (with subtitle and all), but it’s almost the truth about this elusive and mythical formation.

As a matter of fact, they never made a record, while they played a lot of other people’s music (Jimi Hendrix, Cream, The Nice, John Mayall) in 1968, then re-formed (without actually disband first) and called themselves “Egg”.

While technically true, the above is not the entire story…

When they started, Uriel was the name chosen by Steve Hillage (guitar, vocals), Dave Stewart (keyboards, vocals), Mont Campbell (bass, vocals) and Clive Brooks (drums) when they decided to form a band in 1968.

It was during that year that they played other people’s music during live gigs, but did not produce any studio (or live, for that matters) album.

Before the end of 1968, Steve Hillage left Uriel, and the remaining three musicians started to play original scores that they had begun writing. This attracted the attention of Decca/Deram and at this point (for reasons that I cannot find anywhere explained), their managers pressured them for a change in the band’s name. At this point, Uriel died and Egg was born.

Egg was elaborating upon the original compositions that Uriel had started creating, but the type of music moved away from psychedelic rock and entered the more generally requested terrain of the progressive rock.

Because of the Decca/Deram contract and because psychedelic rock was still struggling to lift-off, when a minor Label offered the trio an opportunity to record some “psychedelic” materials, then Egg put a pause in their production and all four original Uriel members re-united to work on a record.

Because of the contractual trap with Decca/Deram, they dusted off the Uriel name and decided not to appear under their real names, but assumed a couple of flamboyant pseudonyms.

Now Uriel was re-born and mustered no one less than Simon Sasparella (Steve Hillage) on guitar and vocals, Njerogi Gategaka (Mont Campbell) on bass and vocals, Sam Lee-Uff (Dave Stewart) on organ and Basil Dowling (Clive Brooks) on drums. 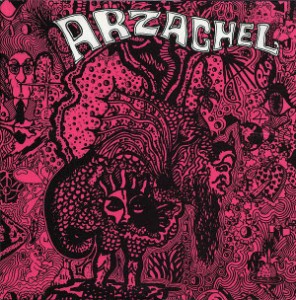 These were the names (and biographies) that adorned the cover of the one and only album that Uriel ever made: Arzachel.

The album is exceptional insofar it’s unique and it probably was one of the most bootlegged records of those years, mostly because its label was so short-lived and that it was gone just a couple of months after launch. There are also some rumors that a kind of pirate copy may have circulated during the 70’s, but I have no idea whether or not that was true.

I already reviewed the album under its title name here, instead of doing so under its producing band, because there was no official indication that it had been made by Uriel.

It is only when they go wrong that machines remind you how powerful they are.